Here are two initial reports from the main march in Washington, D.C., and the solidarity march in San Jose, California, where about 200 marched over a mile from a park to the county jail for a rally with powerful speakers who saluted the prisoners and inspired the crowd. 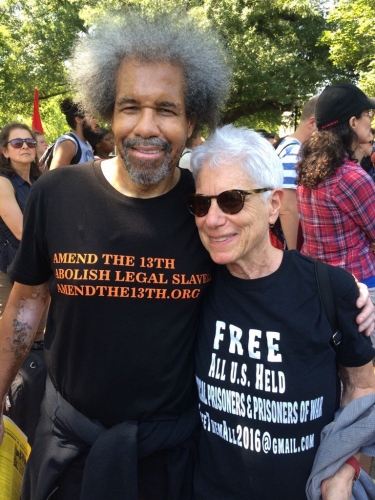 original image (768x1024)
[ Albert Woodfox of the Angola 3, who was held in solitary confinement for over 40 years, was a speaker at the main march across from the White House in Washington, D.C. Laura Whitehorn, also formerly a political prisoner, stands beside him. Albert’s T-shirt was made for him by famed prisoner supporter Annabelle Parker in The Netherlands. ]

On the 19th of August, Millions for Prisoners marched on the White House and held a rally demanding and end to what one speaker called the "Confederate" jail and prison system in which prison labor for 50 cents per hour is essentially slave labor backed by punishments.

Many speakers called out the origin of US police departments in the slave catchers of old, and pointed out that the intensive policing of Black and Brown neighborhoods is still catching slaves for the plantations to this day. The prison system itself was called the New Plantation.

The two main demands of the rally were amending the 13th Amendment to the US Constitution that explicitly permits "slavery and involuntary servitude" as punishment for a crime with the word "except" in the general prohibition of slavery, and holding Congressional hearings on recognizing that exception as a violation of international law and the general principle of human rights. Without this exception to the 13th Amendment, the whole prison/plantation model would be illegal under the rest of the same Amendment.

A speaker from Leonard Pelitier's support committe read out a statement of solidarity with Mumia Abu-Jamal written by Leonard. Another speaker reminded the audience that the entire Florida prison system cancelled all visits for this weekend, saying this proves the power of the movement and that the Enemy fears the people. The Florida prison system had claimed they feared an uprising timed to cooincide with the march. 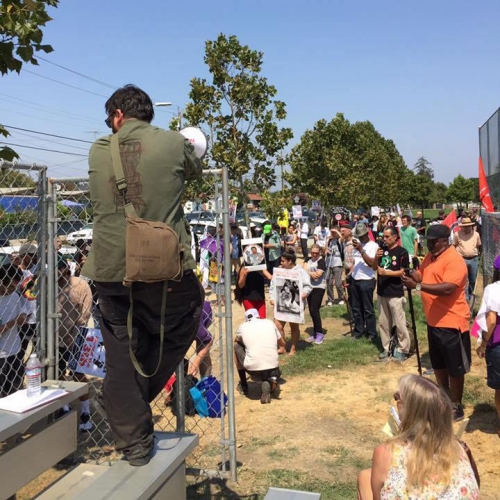 original image (720x720)
[ At Raymond Bernal Jr. Memorial Park, the starting point for the Millions for Prisoners Human Rights March in San Jose on Aug. 19, marchers stood in rapt attention listening to a powerful speech by Heshima Jinsai (Denham), a survivor of the California mass hunger strikes that brought an end to indefinite solitary confinement and a leading intellectual among the many deep thinkers incarcerated across the nation. Heshima founded the Amend the 13th Campaign; learn more at Amendthe13th.org. The Bay View’s new editor, Troy Williams, who emceed the rally, is in the orange shirt on the right. – Photo: Nube Brown ]


Hundreds marched and rallied in San José, Calif., Aug. 19, at a sister action for prisoners’ human rights to the main one that took place the same day in Washington, D.C. California Prison Focus and the united-front coalition Rise Up for Justice were the main co-sponsors and organizers of the action.

Troy Williams, newly appointed editor of the San Francisco Bay View, a “Black newspaper,” and a former “lifer” incarcerated for 18 years in California, the later years at San Quentin, made an opening presentation at the Raymond Bernal Jr. Park assembly point. Williams had been paroled two and a half years ago after founding a video production program at the prison. His goal, he said, was “to give a voice to those who have not had a voice.”

Participants set off on a 1.3-mile march, whose route included a community known as Japantown. Tourists and other patrons in the patio area of a neighborhood restaurant spontaneously broke into applause as the chanting marchers passed by.

A variety of chants included: “Human rights apply to all, even those behind the wall” and “Brick by brick, wall by wall, we will make the prisons fall.”

The march route also included First Street, along which a half dozen or so widely hated bail bonds outfits have their offices. Because the march was led by Williams and a number of other parolee ex-prisoners whose security was paramount, the march did not stop to denounce these vultures.

The march concluded with a lengthy but spirited rally at the Santa Clara County Jail, which included a minute of silence for the prisoners inside. Nube Brown of California Prison Focus and Rise Up for Justice, along with Troy Williams, chaired the rally. Many former prisoners presented heart-rending stories of the injustices they experienced in prison and after being released.

Among these, former Black Panther Dorsey Nunn, executive director of Legal Services for Prisoners with Children, appealed to the audience to call California Assembly members to pass AB 1008, the Fair Chance Act, which would “ban the box” asking about one’s prison record on job applications.

Others called for building a movement to modify the 13th Amendment to the U.S. Constitution, which ended slavery “except as a punishment for crime whereof the party has been duly convicted. …”

Laurie Valdez, an activist, advocate and single mom, also spoke. She founded justice4josiah.org after the murder of Antonio Guzman Lopez by SJSU PD officers on Feb. 21, 2014. He was the father of their then four-year-old son. Josiah took the mic to say loudly and clearly in response to his mother’s question, what should happen to the police who killed your father, “They should go to prison!”

Bato Talamantez, one of the San Quentin Six and co-founder of California Prison Focus, spoke near the end. He noted that few of the veterans of earlier struggles, such as Hugo Pinell, also one of the San Quentin Six who remained unbroken through 46 years of solitary confinement and 51 years of incarceration until he was murdered on Aug. 12, 2015 – allegedly by two white prisoners at the behest of guards with grudges – were still alive but urged the younger generation to carry on the fight for human rights.

This story first appeared on Liberation News, the newspaper of the Party for Socialism and Liberation (PSL), at https://www.liberationnews.org/march-rally-prisoners-human-rights-san-jose-calif/

Bay View staff contributed to this story.
http://sfbayview.com/2017/08/millions-for-...
Add Your Comments
Support Independent Media
We are 100% volunteer and depend on your participation to sustain our efforts!