by Bradley Allen (bradley [at] bradleyallen.net)
Created to honor the deaths of George and Jonathan Jackson—freedom fighters who were killed by authorities in the early 70s—Black August holds a long tradition and legacy of resistance. 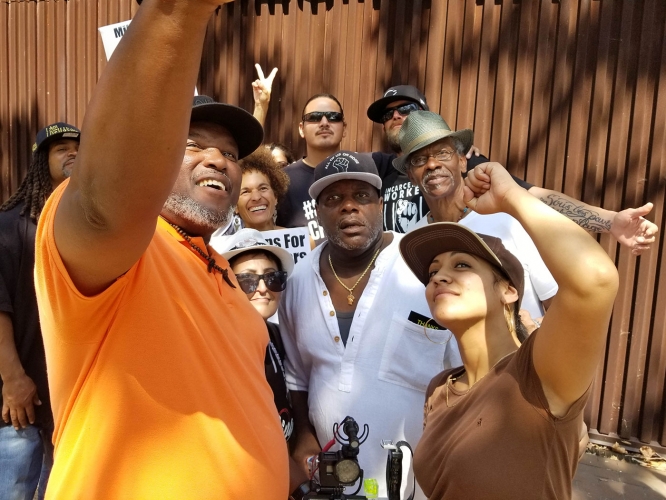 original image (1400x1050)
[ Prisoner solidarity activists, including Troy, Nube, Raymond, Cole, Watani, Dorsey, and Julia, at the Millions for Prisoners march and rally in San José on August 19, 2017. These folks work everyday to amplify the voices of comrades trapped behind walls, to improve their living conditions, and to ultimately smash the cages. ]

Text used for this article was originally written by The Fire Inside collective. Photos and the first two paragraphs are by Bradley Allen, reporting on the march and rally in San José, California on August 19, 2017 in solidarity with the Millions for Prisoners March in Washington DC. The iamWe Prison Advocacy Network organized the mobilization in DC, and reports there were over a dozen solidarity demonstrations on August 19. All photos and text are published in solidarity with prisoners, however they do not necessarily represent the views of the rally organizers and its wide range of participants.

Activists from throughout the Bay Area gathered at Raymond Bernal Jr. Memorial Park at 7th and Mission Streets in San José. At the park, an audio statement was broadcast from political prisoner Joka Heshima Jinsai, founder of "Amend The 13th: Abolish ‘Legal’ Slavery in Amerika Movement.” From there, over one hundred people marched on the sidewalks through Northern California's largest city, and past a long row of bail bonds storefronts. The demonstration featured a rally at James P. McEntee Plaza, next to Santa Clara County's notorious Main Jail, with passionate speakers from San José and surrounding communities, including Watani Stiner, Dorsey Nunn, Laurie Valdez, Troy Williams, Raymond Aguilar, Sean Ramsey, Cole Dorsey, and more.

Last fall anarchists and anti-capitalist radicals turned out in force across the country to show solidarity with the September 9th nationally coordinated prisoner strikes. Protests, noise demos, graffiti campaigns, street blockades, and attacks on those who benefit from prison (whether it be politician’s offices or profiteers) characterized the solidarity with the strikes.

This year, prisoners are again taking action and again calling for outside support. The call and the messaging around it are different, but the overarching purpose — linking outside support with prisoner resistance to erode the grip of white supremacy and capitalism — is the same.

Why August 19th? Why a March on Washington?

August 19th is a Saturday in the middle of Black August. Every year for decades Black radical prisoners and liberationists have identified August as a month for organized resistance and commemoration. Created to honor the deaths of George and Jonathan Jackson—freedom fighters who were killed by authorities in the early 70s—Black August holds a long tradition and legacy of resistance. Since its inception, historians and radicals have linked the month to many examples of oppression and resistance: everything from the Move Bombing and the Watts Rebellion to the Haitian revolution and the first arrival of enslaved Afrikans in Jamestown, VA occurred in the month of August.

Last year prisoners and allies chose the 45th anniversary of the Attica Rebellion as the date to kick off the strike in part because September 9th is recognized and honored by all prisoners, Black, Brown and White. The goal was unified participation and speaking to issues that affect all prisoners. This year, the choice of August 19th foregrounds Black prisoner organizing and focuses the action more emphatically on prison as a white supremacist structure.

Last year the call to action focused on direct action resistance at the site of exploitation, the prisons, which was very inspiring to anarchists and outside supporters. Jailhouse Lawyers Speak heard about and joined the September 9th organizing effort late summer of last year, and yet they held down some of the longest work stoppage and resistance in the country. The Millions for Prisoners March is a project they’ve been working toward for years, and the demonstrations of outside solidarity last September affirmed that this is the year for the March.

Report Backs from prisoners on September 9th that were compiled for The Fire Inside make it clear there’s a powerful feedback loop between prisoners’ actions that inspire outside solidarity, which gains media attention, and in turn empowers prisoners to act, because they know they are not alone and that their resistance (and the inevitable repression that follows) will not go unseen. The August 19 Millions for Prisoners March puts the onus on outside demonstrations of support. A large turnout of solidarity on the outside helps to inspire direct action resistance on the inside.

Prisoners in Texas have already gone public with intentions to strike following August 19th, and the Coalition of Black Trade Unionists have passed a resolution supporting the strike and prisoner organizing. Florida officials are using the Millions for Prisoners March as justification to indefinitely lock down all state facilities and to ramp up the domination by denying prisoners their scheduled visits and their educational, vocational, and ministry programming, along with their recreation. This enhanced repression of nearly 97,000 state prisoners illuminates the states’ fear of the power they try to cage and subdue, while compelling outside supporters to pressure the state to release its tyrannical grip.

Following the horrific display of white terror in Charlottesville that claimed a life and injured many more, anarchist resistance must continue its fight against white supremacy, including the push to abolish prison and carceral control. Antifascist and antiracist efforts take many forms, from confronting white nationalists in the streets to challenging the new slaveholders in the U.S. who operate and fund the world’s largest caging system.

§Justice for Josiah
by Bradley Allen 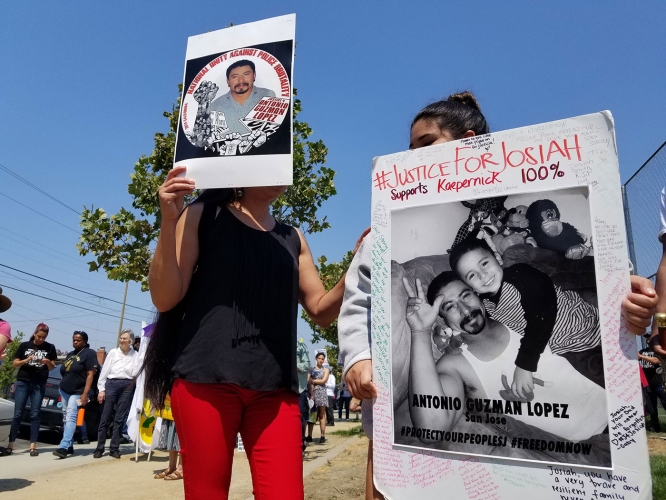 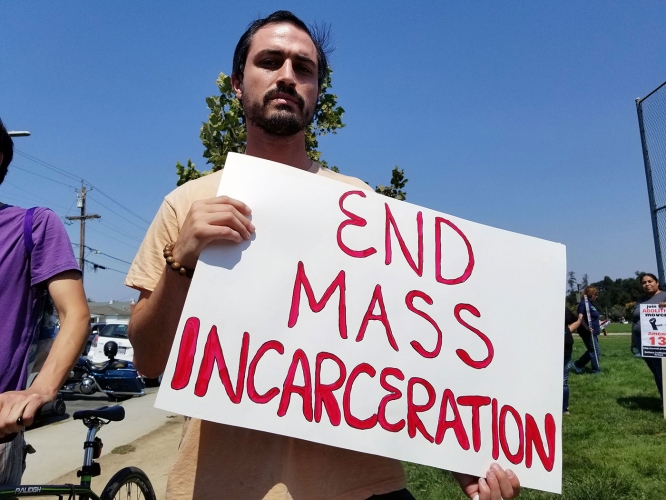 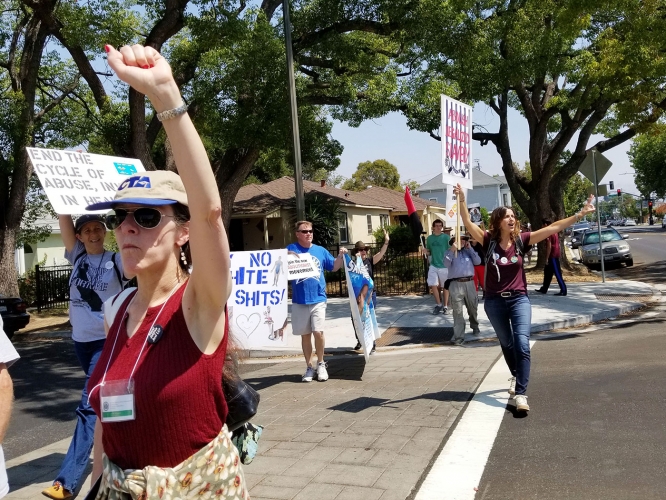 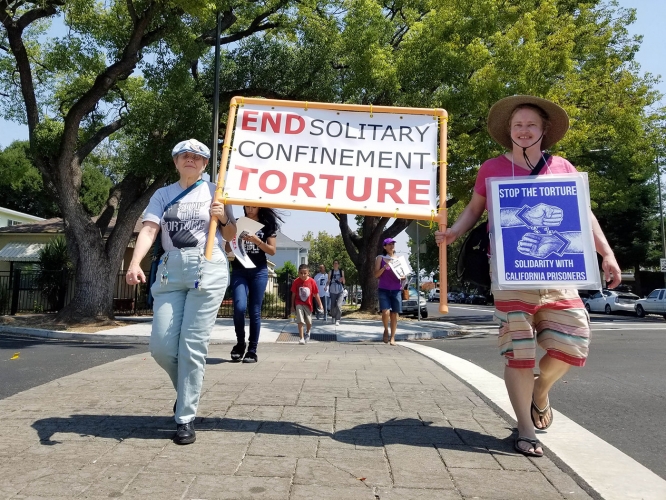 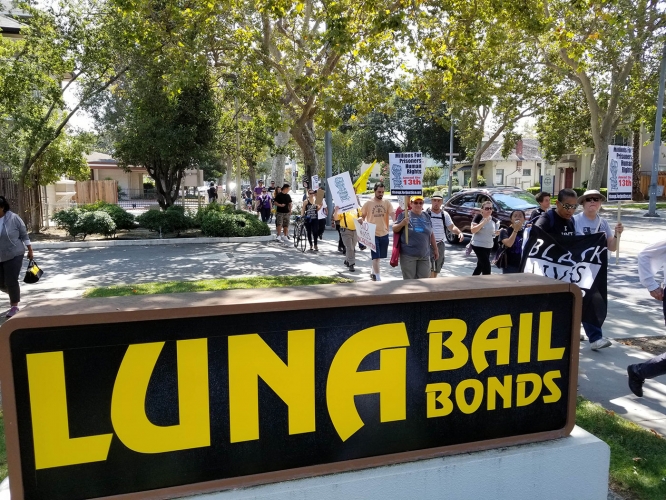 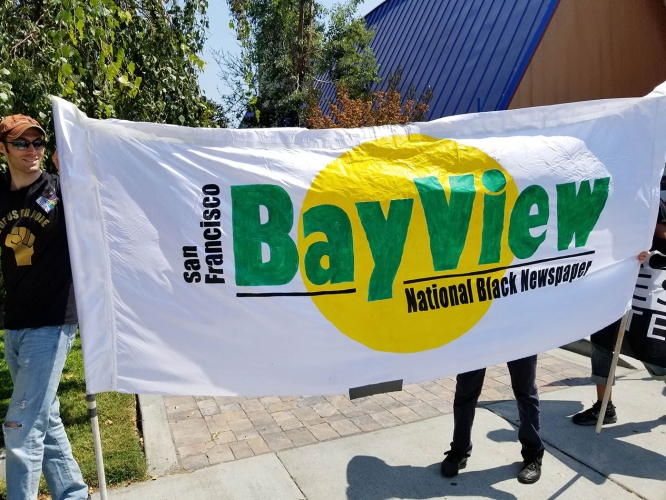 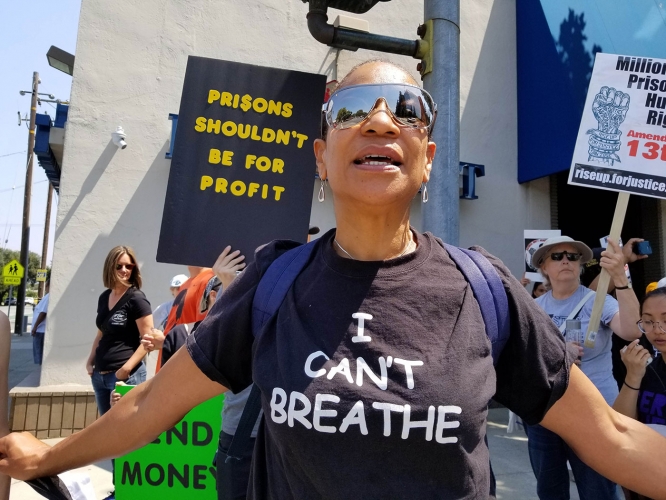 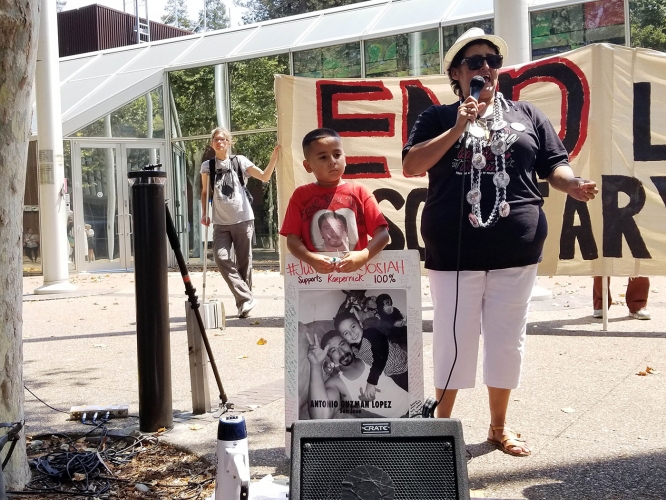 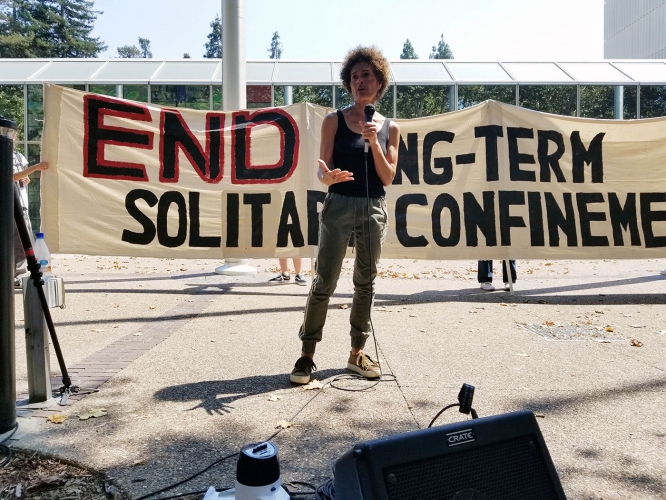 original image (1400x1400)
Add Your Comments
Support Independent Media
We are 100% volunteer and depend on your participation to sustain our efforts!