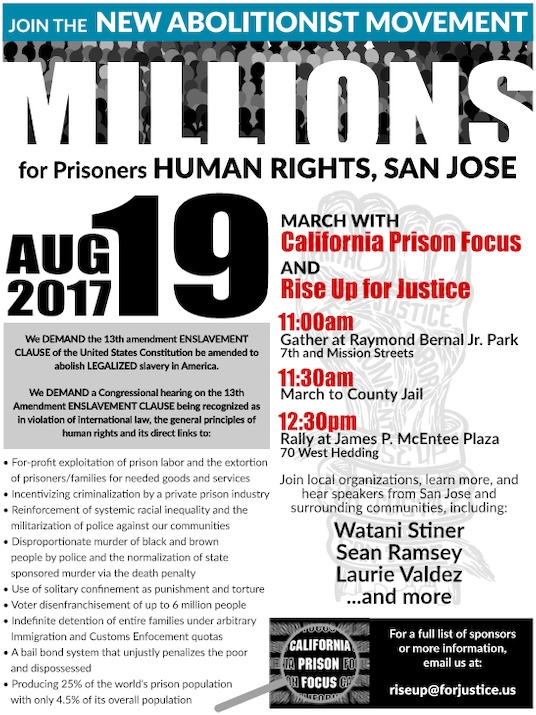 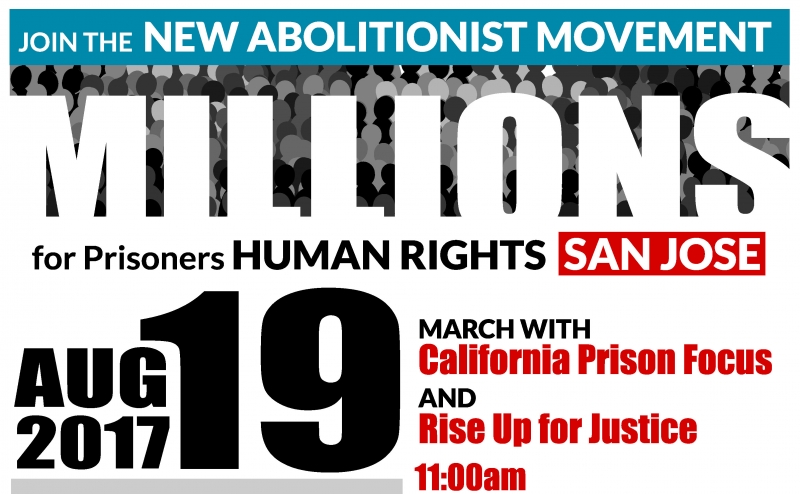 On AUGUST 19, 2017 please join in solidarity with the historic Millions for Prisoners Human Rights March. People from all over the country will be marching and hosting a rally at the White House to formally issue and demand the removal of the 13th Amendment “exception” clause that legalizes slavery. People are traveling from as far as California to join the March. Solidarity marches, rallies, and protests are being planned across the country to coincide with the DC event.

We DEMAND the 13th Amendment ENSLAVEMENT CLAUSE of the United States Constitution be amended to abolish LEGALIZED slavery in America.

We DEMAND a Congressional hearing on the 13th Amendment ENSLAVEMENT CLAUSE being recognized as in violation of International law, the general principles of human rights and its direct links to:

• For profit exploitation of prison labor and the extortion of prisoners/families for needed goods and services
• Incentivizing criminalization by a private prison industry
• Reinforcement of systemic racial inequality and the militarization of police against our communities
• Disproportionate murder of black and brown people by police and the normalization of state sponsored murder via the death penalty
• Use of solitary confinement as punishment and torture
• Voter disenfranchisement of up to 6 million people
• Indefinite detention of entire families under arbitrary Immigration and Customs Enforcement quotas
• A bail bond system that unjustly penalizes the poor and dispossessed
• Producing 25% of the world’s prison population with only 4.5% of its overall population

MARCH WITH
California Prison Focus & Rise Up for Justice

For a full list of sponsors or more information, email us at: riseup [at] forjustice.us 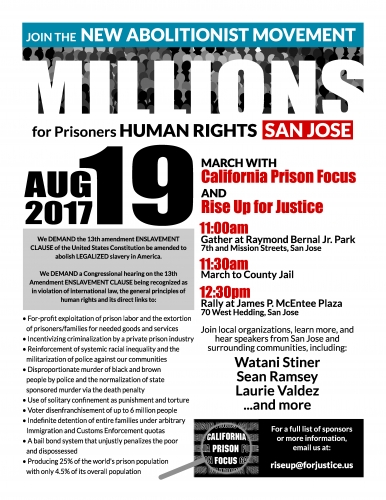 original image (3519x4554)
https://prisonerhungerstrikesolidarity.wor...
Add Your Comments
Support Independent Media
We are 100% volunteer and depend on your participation to sustain our efforts!