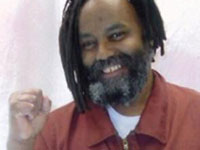 On March 30, Mumia Abu-Jamal collapsed in the prison infirmary at SCI Mahanoy from diabetic shock before being hospitalized in the ICU at Schuylkill Medical Center. Despite his serious condition, he was transferred back to the prison just two days later. The National Lawyers Guild is calling for immediate and independent medical attention for him, and on Friday, April 10, community members in Oakland will participate in a National Day to "Stand Up for Mumia" at the Federal Building.

Although Mr. Abu-Jamal had sought care for classic warning signs of the disease over the previous three months, including extreme weight loss and severe eczema, the prison infirmary had failed to diagnose him with type 2 diabetes which, with proper medical attention, could have potentially prevented Mr. Abu-Jamal’s current illness.

The medical attention given to Mr. Abu-Jamal thus far has been administered without adequate information and has raised questions of medical neglect, as it was only after a flood of calls by activists and supporters to officials at SCI Mahanoy that he was allowed a handful of very brief visits by family. His family and attorneys are demanding he see a diabetes specialist and dermatologist who is independent of the Pennsylvania DOC health care system.

Oakland, April 10: #MumiaMustLive - National Day to Stand Up for Mumia