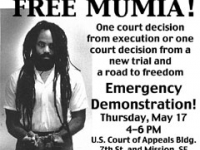 May 17th: Court Date and Protest for Mumia
Protesters Worldwide Stand With Mumia As His Attorneys Go to Court

On Thursday, May 17th, oral arguments were heard in federal court in Philadelphia on what could be the last appeal of death-row journalist Mumia Abu-Jamal, who is known as the "Voice of the Voiceless." Hundreds of people packed the courtroom, while many more stood in solidarity with Mumia outside of that courthouse and many other around the world.

Hans Bennett's interviews with Ward Churchill, Volker Ratzmann from The German Parliament, Ramona Africa, and Mark Taylor from Educators for Mumia, all of whom were present at the hearing. In San Francisco, supporters of Mumia held a rally outside of the 7th U.S. Court of Appeal building, at 7th and Mission Streets in San Francisco, from 4pm to 6pm on May 17th. In San Jose, a rally was held at 4pm at the Federal Building at 2nd and San Carlos St. Mumia Abu-Jamal, who has been on death row in Pennsylvania for 25 years, is the victim of a police and prosecutorial frame-up and a racist judge. He continues to serve the movement for human rights as a journalist writing and broadcasting from prison. Democracy Now report | Corporate Reports | Legal Updates and Flyer | How to donate to Mumia's legal defense | WSWS article about Mumia's hearing | Hans Bennett's April Interview with Atty. Robert R. Bryan | Mumia gana premio Sacco y Vanzetti | Movilización ante la audiencia del 17 de mayo | Mumia's Oral Arguments set for May 17