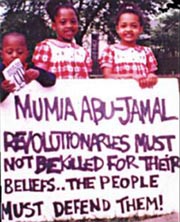 Saturday, April 24th, 2004 was Mumia Abu-Jamal's 50th birthday. Mumia was a member of the Black Panther Party as a teenager, and was a radical radio journalist in Philadelphia after he left the party. Mumia was convicted of the murder of police officer Daniel Faulkner after he was wounded in a December 9, 1981 shooting that left Faulkner dead. Faulkner's widow, the Fraternal Order of Police, and Justice for Police Officer Daniel Faulkner maintain that Mumia is guilty, while a man named Arnold Beverly has come forward to state that he is the man who shot Officer Faulkner. On December 18, 2001, Judge William Yohn ruled on Mumia's habeas corpus petition and overturned the death sentence in his case. However, Mumia is still being held on death row. “The deficiencies that Amnesty International has identified in the case of Mumia Abu-Jamal mirror broader concerns over the application of the death penalty nationwide.” Mumia, who is an honorary citizen of Paris, France, continues to write articles and books from Death Row, and his writings are recorded by the Prison Radio Project.

The movement to free Mumia seemed to reach its peak in 1999, when tens of thousands marched in Millions for Mumia demonstrations in San Francisco and Philadelphia. Since then, in spite of legal victories on paper, a scandal in which Mumia fired his former lawyers led to fragmentation of the movement. The new legal team brought to light the confession of Arnold Beverly. The legal team continues to push for a new trial to air the new evidence about Mumia's innocence. The movement to free Mumia continues to face and deal with challenges such as how former Mumia supporter Michael Moore, in his most recent book, expressed his doubt of Mumia’s innocence.

Events in San Francisco to observe Mumia's birthday: The Mumia Abu-Jamal First Internationalist Film Festival was held on Friday the 23rd and Saturday the 24th at the Victoria Theatre in San Francisco. The Festival films were about global resistance movements, including Haiti and South Africa, and one of the films shown was about Mumia himself. After Saturday's noon film, there was a March and Rally for Mumia's freedom. About 150 people gathered at 2pm at 16th St BART, and then marched to 24th St for a rally that grew to 250 people and lasted until 5pm. Speakers included labor activists, representatives of communist organizations, and former Black Panthers such as Kiilu Nyasha. People also highlighted the struggles of other political prisoners, such as Hugo Pinell.
Photos:1 | 2 Video: 1
More info about Mumia:
The Bay Area Mobilization to Free Mumia | International Concerned Family and Friends of Mumia | Refuse and Resist's Mumia Site | The Struggle to Free Mumia Must Intensify | One Story of the shootout