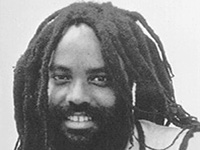 On May 17th, the 3rd Circuit Court of Appeals in Philadelphia was packed as oral arguments were heard in the case of Mumia Abu-Jamal. A decision is expected sometime very soon. If the Court rules to uphold the death sentence or denies Mumia’s appeals for a new trial or new hearing, the Partisan Defense Committee and Labor Black League for Social Defense say that protests should take place the day after a decision or on Monday if the decision falls on Friday or Saturday. A demonstration in Oakland would take place at 14th and Broadway from 4:30-6:30 pm. In San Francisco, the Mobilization to Free Mumia Abu-Jamal has called for a demonstration on the "day after" at 5 pm at the Federal Court House, 7th and Mission Street (NOT the Federal Building). Read more.

Mumia Abu-Jamal is a former Black Panther Party spokesman, supporter of the MOVE organization and award-winning journalist known as the “voice of the voiceless.” Mumia and his supporters all over the world allege that he was framed up in 1982 on false charges of killing a Philadelphia police officer. Since he was sentenced to death based on his political history and beliefs, Mumia has spent 25 years on death row for a crime which many people believe he did not commit.