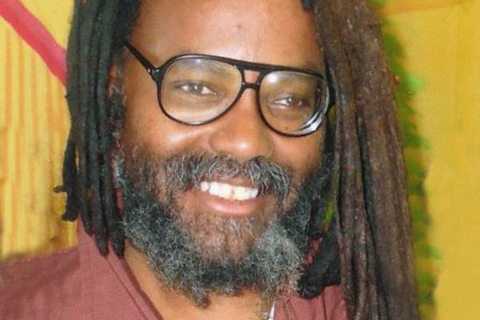 Update: In a major victory in Pennsylvania, imprisoned journalist and former Black Panther Mumia Abu-Jamal has won an injunction forcing the Pennsylvania prison system to provide him life-saving Hepatitis C medicine. Lawyers with the Abolitionist Law Center say, "This is the first case in the country in which a federal court has ordered prison officials to provide an incarcerated patient with the new medications that came on the market in 2013."

International protests got Mumia off death row, but prison officials currently are risking his life by medical neglect. They are withholding life-saving Hepatitis C medication he and 7,000 other Pennsylvania prisoners desperately need. After three and a half decades locked up, mostly in solitary confinement, activists around the globe continue to rally to free Mumia. On December 8, marking the 35th anniversary of imprisonment for American political prisoner Mumia Abu-Jamal and to protest the refusal by prison authorities to provide necessary medication, a coalition of supporters in Philadelphia, Toronto, Canada, Wellington, New Zealand, and Oakland demonstrated.

A recent US Supreme Court decision, “Williams vs. Pennsylvania,” could open the door for Mumia’s freedom. The decision ruled that a prosecutor cannot later sit as judge over the same defendant’s appeal. This is exactly what happened in Mumia’s case. On this basis Mumia’s attorneys have filed a new legal action. If successful, the Pennsylvania Supreme Court rulings that upheld his conviction would be overturned. Mumia could then re-appeal the issues of his innocence, jury bias and falsified evidence to win an outright dismissal of charges or get a new trial.

The New Path to Mumia’s Freedom |