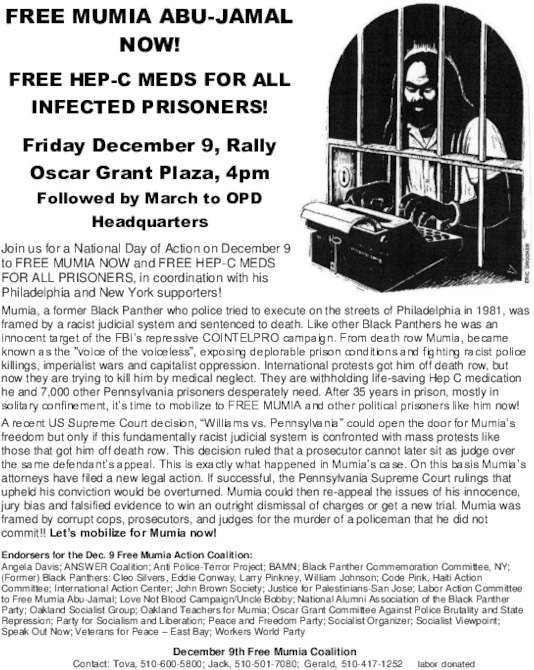 Join us for a National Day of Action on December 9 to FREE MUMIA NOW and FREE HEP-C MEDS
FOR ALL PRISONERS, in coordination with his Philadelphia and New York supporters!

Mumia, a former Black Panther who police tried to execute on the streets of Philadelphia in 1981, was framed by a racist judicial system and sentenced to death. Like other Black Panthers he was an innocent target of the FBI’s repressive COINTELPRO campaign. From death row Mumia, became known as the "voice of the voiceless”, exposing deplorable prison conditions and fighting racist police killings, imperialist wars and capitalist oppression. International protests got him off death row, but now they are trying to kill him by medical neglect. They are withholding life-saving Hep C medication he and 7,000 other Pennsylvania prisoners desperately need. After 35 years in prison, mostly in solitary confinement, it’s time to mobilize to FREE MUMIA and other political prisoners like him now!

A recent US Supreme Court decision, “Williams vs. Pennsylvania” could open the door for Mumia’s freedom but only if this fundamentally racist judicial system is confronted with mass protests like those that got him off death row. This decision ruled that a prosecutor cannot later sit as judge over the same defendant’s appeal. This is exactly what happened in Mumia’s case. On this basis Mumia’s attorneys have filed a new legal action. If successful, the Pennsylvania Supreme Court rulings that upheld his conviction would be overturned. Mumia could then re-appeal the issues of his innocence, jury bias and falsified evidence to win an outright dismissal of charges or get a new trial. Mumia was framed by corrupt cops, prosecutors, and judges for the murder of a policeman that he did not commit!!

END_OF_DOCUMENT_TOKEN_TO_BE_REPLACED
Added to the calendar on Mon, Nov 21, 2016 1:45PM
§Mumia: Do you see law and order?
by Dec 9 Mumia Action Coalition 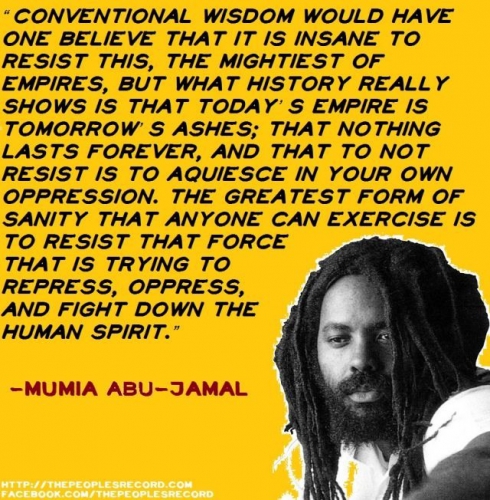 original image (640x652)
END_OF_DOCUMENT_TOKEN_TO_BE_REPLACED
Add Your Comments
Latest Comments
Listed below are the latest comments about this post.
These comments are submitted anonymously by website visitors.
TITLE
AUTHOR
DATE
Bigger Picture
peter alexander
Support Independent Media
We are 100% volunteer and depend on your participation to sustain our efforts!