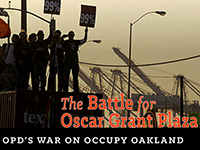 The National Lawyers Guild and Prison Radio will present two films on repression and resistance at 3pm on Saturday, October 19 at the The New Parkway Theater in Oakland:

The Battle for Oscar Grant Plaza is a short documentary by Jacob Crawford about how the City of Oakland and its police tried to shut down the budding "Occupy Wall Street" movement, turning downtown Oakland into a teargas-filled war zone and injuring numerous people. Police video obtained in discovery in the National Lawyers Guild's successful lawsuit and interviews with activists and journalists about their experiences, tell the real story of the disastrous Fall 2011 police actions that pushed the troubled OPD to the brink of federal receivership. The film was co-produced by Dave Id of Indybay.org.

Manufacturing Guilt is a short film that appears as a Bonus Feature on the DVD Mumia: Long Distance Revolutionary. The short takes on the colossus of Abu-Jamal's contentious case, distilling a mountain of evidence and years of oft-repeated falsehoods to the most fundamental elements of police and prosecutorial misconduct that illustrate a clear and conscious effort to frame Mumia Abu-Jamal for the murder of patrolman Daniel Faulkner.