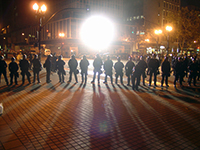 Twelve people injured by the Oakland police department during Occupy Oakland demonstrations have settled a federal civil rights lawsuit with the city of Oakland for a total of $1.17 million. The physical injuries came as a result of OPD's violent response to Occupy Oakland on October 25 and November 2, 2011. Plaintiffs to receive compensation for injuries include David Morse, a long-time member of the San Francisco Bay Area Independent Media Center (Indybay).

The settlement in the Campbell vs. City of Oakland case comes on the heals of another $1 million settlement still pending final approval, Spalding vs. City of Oakland. As a result of both cases, OPD has agreed to allow the federal court to enforce OPD's compliance with its own crowd control policy and to negotiate with the National Lawyers Guild (NLG) and the American Civil Liberties Union (ACLU) before making any changes to the policy. The control policy prohibits police from shooting "less lethal" impact munitions or tossing explosive teargas grenades into crowds, and prohibits mass arrests without warning or opportunity to disperse.

"These settlements are an important victory for democracy,” said Bobbie Stein, one of the plaintiffs' attorneys. ”We are hopeful that with these settlements, and the reform process under the watch of the new Compliance Director, we will achieve a culture shift in the Oakland Police Department and end the brutalization and wrongful arrests of activists and people of color in Oakland. While we remain optimistic, we are mindful of the 10-year history of broken promises, and we will be watching carefully and ready to take further action if necessary."