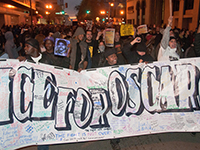 On November 5th, 2010, hundreds of demonstrators gathered in front of Oakland City Hall to protest the light sentence given to Johannes Mehserle for killing Oscar Grant by shooting him in the back in front of hundreds of witnesses. As evening fell, marchers took to the streets and headed toward the Fruitvale BART station, the scene of the shooting on January 1, 2009. Oakland police, however, had other plans. One hundred and fifty demonstrators were detained and arrested, forced to spend up to twenty-four hours in police custody under inhumane conditions. As no one arrested was ever even charged, the arrests and jailing amounted to illegal extrajudicial punishment of protesters for merely exercising their right to free speech and protest police brutality. In a class action settlement between arrestees and the City of Oakland announced today by the National Lawyers Guild, the city has not only acknowledged that the arrests were illegal but has agreed to pay $1.025 million in compensation to the plaintiffs and their attorneys. Additionally, Oakland police have given their consent to abide by a revised crowd control policy meant to avoid such unnecessary harm to protesters in the future and to have their adherence to the policy overseen by the court for a period of up to seven years. The NLG calls the settlement an "important victory for democracy."