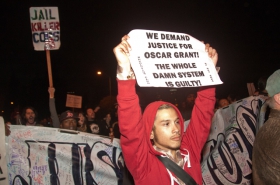 On Friday, November 5th, former BART police officer Johannes Mehserle was sentenced for the shooting death of Oscar Grant, III. Mehserle received the minimum jail sentence possible from Judge Robert Perry, two years. Subtracting the 146 days Mehserle has already been behind bars in an LA County jail and another 146 days for "good behavior," he is expected to be released from state prison in less than one year from now.

Concerned community members gathered together in Frank Ogawa Plaza by Oakland City Hall to respond to the sentencing and to honor Oscar. The schedule included live art from 2-4pm and speakers from 4-6pm. A previously planned march from Frank Ogawa to Li'l Bobby Hutton (DeFremery) Park in West Oakland, after the 6pm conclusion of the gathering downtown, has been canceled by organizers. A spontaneous march that followed the event ended with 152 arrests on 6th Avenue.

More Coverage of the Justice for Oscar Grant Movement on Indybay