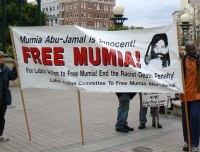 The Third Circuit Court of Appeals has ruled against a new trial for Mumia Abu-Jamal. The court has called for a sentencing hearing that would result in either an execution or life in prison without parole. Supporters of Mumia called for protests to be held "the day after" the decision. The San Francisco demonstration and press conference took place at 5:00 pm at the federal courthouse at 7th and Mission ( Report |

Photos) A "day after" protest also took place in New York on Friday.

Report from press conference and protest outside the federal courthouse in Philadelphia on March 31st. National protests are being planned for April in San Francisco and Philadelphia.

It was announced on March 27th that U.S. Court of Appeals for the Third Circuit has rejected all of Mumia Abu-Jamal’s demands for a new trial. In 1982 Jamal was convicted of the murder of Police Officer Daniel Faulkner in a trial where most African American jurors were systematically excluded and where critical evidence that would have proved the defendant’s innocence was excluded. The State of Pennsylvania has been ordered to hold a new sentencing hearing within 180 days. In that hearing the jury's decision will be limited to a finding of either life imprisonment, or execution by lethal injection. Jamal’s attorneys will appeal the Third Circuit's decision to the U.S. Supreme Court.