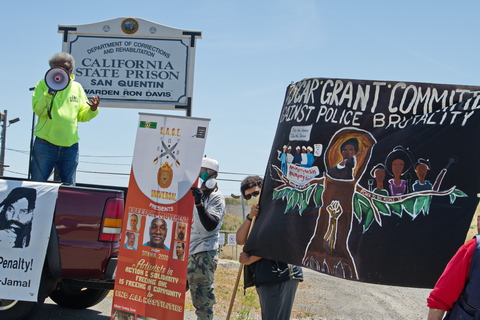 On May 9, in the Larkspur Landing Ferry parking lot, activists applied signs and banners to their cars and went off to a noisy protest on the roads surrounding Marin's San Quentin prison. They protested the coronavirus dangers that the prison, with its concentration of people, represents to inmate and wider public health. To those incarcerated during the current pandemic, it is nothing less than a potential death sentence.

While cars circled the prison, others held a rally, observing social distancing, at the Prison's West gate. Protesters also demanded the release of Mumia Abu-Jamal and an end to many other well known injustices. The ILWU (International Longshore and Warehouse Union) and Code Pink were among the organizers.