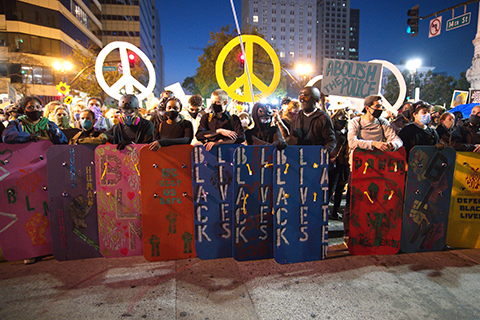 On July 25, a group of about 2,000 people gathered at Oscar Grant Plaza in Oakland to stand in solidarity with the uprising in Portland, Oregon. Foremost amongst their demands, they called for justice for Black lives stolen by police violence. In a pre-march rally, many spoke out against systemic racism, institutionalized white supremacy and the need to defund and dismantle the police. Others expressed outrage with Trump’s order to send Federal agents into U.S. cities under a racist “Law and Order” pretext. Readying themselves to march, protesters raised colorfully painted body sized shields in a front line that stretched across the road. A banner approximately 20 feet long read, “Oakland to Portland, Cops and Feds, Off Our Streets.”

The march was boisterous, with call and response chants and amplified music. By about ten o'clock, most marchers were back at Oscar Grant Plaza. Oakland police tweeted and corporate media glommed onto reports that some demonstrators set a fire inside the Alameda County courthouse, damaged police station windows, spray-painted graffiti, shot fireworks, and pointed lasers at officers. According to the San Francisco chapter of the National Lawyers Guild’s Demonstration Committee, shortly after midnight police charged the crowd for several blocks from Oakland police headquarters. Approximately four arrests were made.

Oakland March In Solidarity With Portland |

At Solidarity with Portland March, A "Wall of Moms" Ready |

Protesters March with Shields in Response to State-Sanctioned Violence |