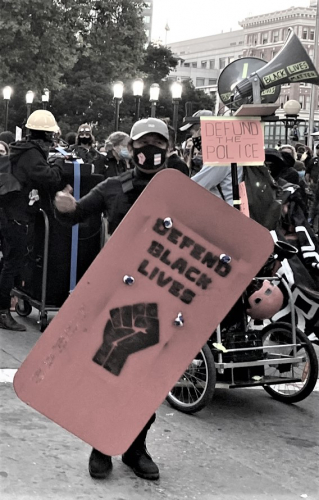 On Saturday, July 25, 2020, a group of about 2,000 people gathered at Oscar Grant Plaza in Oakland on Saturday evening to stand in solidarity with theuprising in Portland, OR. Among their demands were justice for lives stolen by police violence: George Floyd, Breonna Taylor, and Sean Monterrosa, recently murdered by Vallejo PD.

Before marching, organizers at the plaza spoke out against systemic racism, institutionalized white supremacy and the need to defund and dismantle the police. Many held signs that expressed outrage with Donald Trump’s order to send Federal gang squads into U.S. cities under a racist “Law and Order” pretext. Shortly after midnight police charged the crowd for several blocks from Oakland PD and approximately four arrests were made.
https://nlgsf.org/
Add Your Comments
Support Independent Media
We are 100% volunteer and depend on your participation to sustain our efforts!