Add an Event
Newswire
Calendar
Features
Home
Donate
From the Open-Publishing Calendar
From the Open-Publishing Newswire
Indybay Feature
Related Categories: U.S. | Police State & Prisons
Six Mayors Demand Congress Block Federal Agents From US Cities
by Eoin Higgins
Wednesday Jul 29th, 2020 10:32 AM
Six mayors from around the country sent a letter to Congress Monday calling for legislation to block President Donald Trump from continuing to deploy federal agents to U.S. cities, calling the administration's use of force "unacceptable, un-American, and unconstitutional." "This provocation is resulting in direct physical harm to our communities and must end," the letter reads. 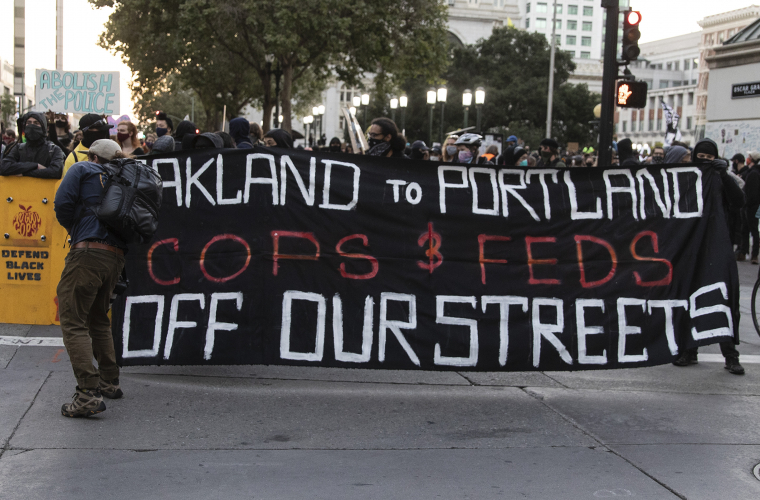 As Common Dreams has reported, the ongoing deployment of federal agents to U.S. cities has been met with resistance around the country. In Portland, Oregon, thousands of demonstrators have taken to the streets to protest the presence of heavily armed Department of Homeland Security (DHS) agents to the city.

"This administration's egregious use of federal force on cities over the objections of local authorities should never happen," they write. "As demonstrated now in Portland, these federal forces have used the pretext of protecting federal property to also patrol streets, way outside of their lawful jurisdiction, arrest residents without cause, and trample on Constitutional rights."

The mayors note that the agents appear to have no coherent plan and are ill-prepared for domestic policing.

"In an operation to protect lives, what is needed is a clear mission, a detailed operations plan, a clear chain of command, and coordination at all levels of government," the mayors write. "These federal forces are not trained in modern policing in a city context, such as de-escalation, have a completely different training and mindset regarding use of force, and have no cultural literacy regarding the communities they are engaging."

While Trump has sent federal agents to U.S. cities in an effort to escalate the situations on the ground in a political ploy for his reelection, it's not clear the strategy is working. A Gallup poll released Tuesday shows a clear majority of Americans—65%—support the demonstrations.

https://www.commondreams.org/news/2020/07/...
Add Your Comments
Support Independent Media
We are 100% volunteer and depend on your participation to sustain our efforts!