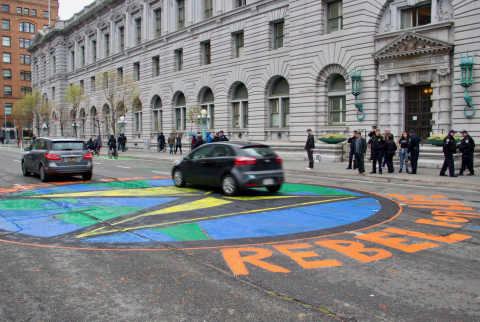 Earth Day in California Site of Creative Protests
For Extinction Rebellion, Every Day is Earth Day

A full week ahead of Earth Day, on April 15, youth with Extinction Rebellion SF Bay Area led a rally, march, and direct action, shutting down 7th Street in San Francisco and painting a giant street mural in front of the Federal Building. On April 20, young people got down and demonstrated dance moves in Fresno where more than a thousand people came to celebrate the planet in Radio Park.

Earth Day is officially April 22, and other California cities honored that day with creative action. In Santa Cruz, dozens lay down on a downtown sidewalk to dramatize the growing crisis of species extinctions fueled by the global climate crisis. Participants dressed in black costumes and wore signs featuring a species, a region, flora, or fauna that has passed into extinction or suffered mass collective trauma due to extreme weather patterns. In the SF Peninsula city of Menlo Park demonstrators sang their message: Save Seven Endangered Redwoods Downtown.

Also on April 22, members of Extinction Rebellion LA scaled the iconic globe outside Universal Studios. The climate activists waved green flags that read “climate emergency” from atop the structure, and told LA County sheriff's deputies they could not come down because they were superglued onto the globe. Four people were arrested and charged with felonies. Activists there said that every day should be Earth Day and called for drastic action to avert environmental collapse.

Earth Day Action to Save Redwoods on the Chopping Block

For Extinction Rebellion, Every Day is Earth Day! |

Earth Day Debate: The Green Future or A Green Fraud? |

Mother Earth's rent is ours or his? The Walking Tour |

Sound the Alarm for the Climate (April 15)