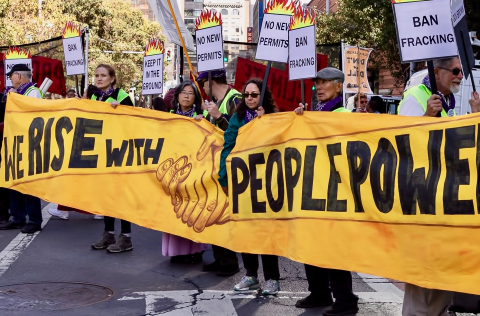 The GCAS, hosted by Governor Jerry Brown, was designed to celebrate climate achievements and encourage more action. Protesters insisted that Governor Brown continues to protect billion-dollar dirty oil corporations that actively seek to undermine the necessary change. They called on the mayors and other public servants at the summit to work for genuine and urgent climate protection, and to address the disproportionate effects of climate change on underserved communities.

Protesters took to the streets again on September 13th, after the summit had commenced, this time shutting down the intersections of Third and Folsom and Third and Howard, substantially disrupting entrance into the GCAS venue. Police presence was heavy; demonstrators gathered behind barricades and were pushed further back by lines of law enforcement and there were two arrests. The week of actions was in solidarity with indigenous and frontline communities.

Photos and Video from Climate March |

Rise Up for Climate, Jobs and Justice in SF Has Overbearing Organizers |

At the Forefront of Global Climate Action Summit Protest