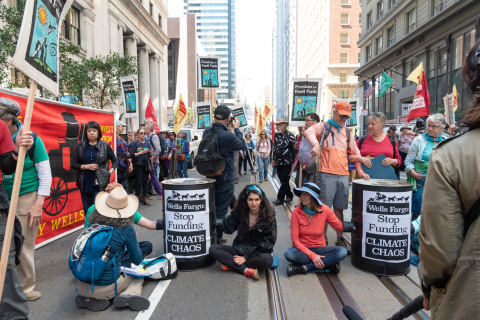 On March 18, climate activists targeted the nation's fourth largest bank for protest, just in time to crash its annual founding day celebration. They seized the entire block of California Street between Montgomery and Sansome for three hours, shutting down a major entrance at Wells Fargo headquarters during that time. The action was the culmination of the March for Fossil Fuel Freedom that started in Palo Alto days earlier, a trek of hundreds forming a human billboard to demand Wells Fargo stop funding the fossil-fuel industry.

Once in San Francisco, protesters engaged in non-violent civil disobedience by locking themselves to oil barrels decorated with slogans in the middle of the street. A rally in the road included chanting, rap music, singalongs, and speakers, all demanding that Wells Fargo invest in clean-energy solutions to the climate crisis instead of lending to what the bank refers to as "the traditional energy sector."