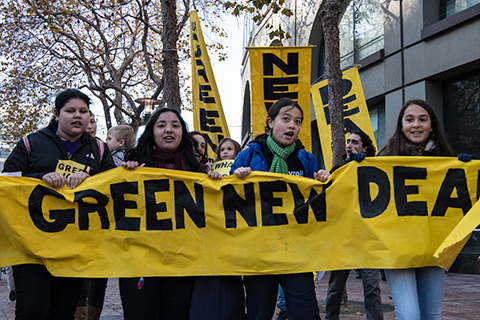 The "Green New Deal" is a proposed program for moving America quickly away from a climate catastrophe and into a sustainable future while simultaneously creating millions of new jobs. Inspired by the New Deal programs of the 1930s that lifted millions out of poverty and built countless large-scale infrastructure projects during the Great Depression, proponents of the Green New Deal call for creation of a more equitable economy that is environmentally sustainable.

Originally proposed in 2007, the concept was endorsed by the United Nations Environment Programme in 2008. Today, the idea continues to pick up steam with European and U.S. Green Party backing, as well as legislators such as incoming congressional representative Alexandria Ocasio-Cortez of New York.

On Tuesday, December 11, two days before the close of the 115th U.S. Congress, the Sunrise Movement of young people staged a demonstration to demand a Green New Deal at soon-to-be Speaker of the House Nancy Pelosi's San Francisco office. The day before, a demonstration was held at Pelosi's office in the Capitol Building in Washington, D.C. and over 100 protesters were arrested. The protests were organized to push Pelosi toward creating a Select Committee on a Green New Deal and supporting legislation proposed by Ocasio-Cortez.