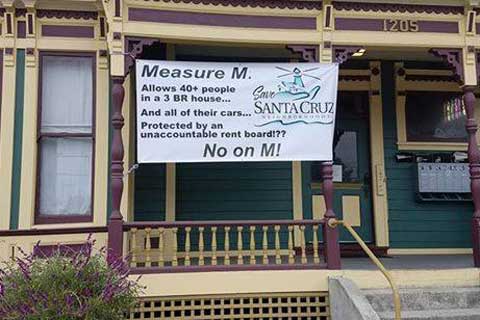 The opposition to Measure M has now raised over three quarters of a million dollars, which is being used to spread fear and misinformation about rent control. While most of this money comes from out of the area, real estate interests like the National Association of Realtors and the California Apartment Association, local landlords in Santa Cruz are also part of the problem. Over the last week, a number of banners have appeared on buildings owned by Darius Mohsenin, a landlord with dozens of properties from Santa Cruz to Salinas, San Leandro, and Vacaville. One banner on a small apartment building on lower Pacific claims that under Measure M, 146 people would be allowed to live there. This is a wild exaggeration; there are federal and state guidelines to protect against overcrowding, which would not be changed by Measure M.

In response, community members in support of tenants rights continue to demonstrate at the properties of slumlords. On Thursday, October 11, a rally was held at Trescony park, where community members then marched to one of the larger signs, at 1612 Mission Street. The rally highlighted Harry Dong, the owner of the building, who is a landlord and opponent of Measure M. He preys on desperate tenants to draw the highest possible rents he can. In 2017, Dong told tenants applying to live in his rentals to bid above his original asking price. Dong emailed: “Many more qualified applicants have applied to rent these houses than usual — […] If you and your group are willing to pay more, then please email me the amount of the proposed monthly rent you are willing to pay, along with the address of the house or houses you would like to rent.”

Students United with Renters write: Because tenants are struggling to find basic shelter, Dong knows he can price gouge and most of us will just have to take it. Tenants with more money will win out and have shelter, the rest of us will live in cars or the woods. The No on M campaign insists that they are good landlords that charge fair rents, but for some reason they are comfortable with Dong displaying their sign. Maybe its his $1000 campaign contribution. He and landlords like him are supported by incredible amounts of money from real estate interests from out of town. No on M has raised close to $750,000 in cash and in-kind contributions to fight rent control here.

Eviction notice rescinded for tenants at 526 and 528 California Avenue |