Add an Event
Newswire
Calendar
Features
Home
Donate
From the Open-Publishing Calendar
From the Open-Publishing Newswire
Indybay Feature
Publish to Newswire
Add an Event
Related Categories: Santa Cruz Indymedia | Health, Housing & Public Services | Racial Justice
No on M Slumlord Darius Mohsenin Distributes Racist Flyers at No Place Like Home Event
by Students United with Renters
Friday Oct 19th, 2018 1:48 PM
Local slumlord Darius Mohsenin and vocal supporter of the No on M Campaign distributed these flyers at the No Place Like Home event in Santa Cruz yesterday. This is an outrageous display of racism. These flyers look like something found at a KKK rally or a Proud Boys meetup. Darius is a large donor to the No on M campaign, and his banners with similar racist and classist undertones can be seen flying prominently around the city. 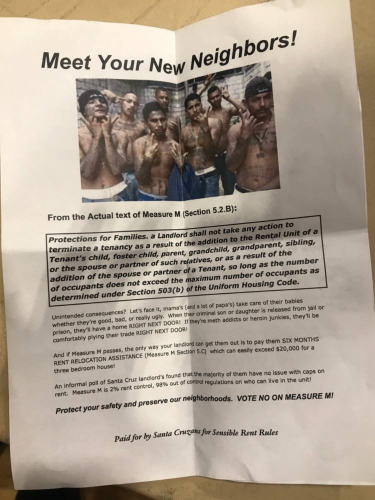 original image (750x1000)
Please share this so people know exactly who Darius is.

And if you already know Darius, who owns a building at Spruce and Pacific, please reach out to us via facebook, email or our hotline if you would like to share stories about him. 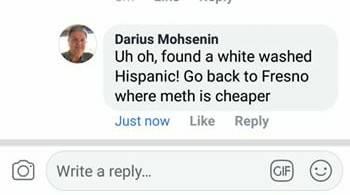 https://www.facebook.com/SURucsc/
§Darius Mohsenin's response to the backlash from the racist No on Measure M flyer
by Students United with Renters Sunday Oct 21st, 2018 7:55 PM 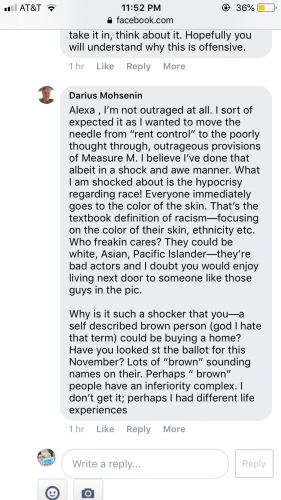 This is what Darius chooses to say to defend that disgusting flyer. This is what we are up against. Yes on M, Yes on 10.
https://www.facebook.com/SURucsc/
§Darius Mohsenin's response to the backlash from the racist No on Measure M flyer
by Students United with Renters Sunday Oct 21st, 2018 7:56 PM 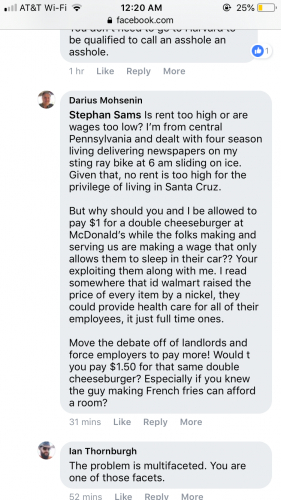 This is what Darius chooses to say to defend that disgusting flyer. This is what we are up against. Yes on M, Yes on 10.
https://www.facebook.com/SURucsc/
§Darius Mohsenin was Prominently Featured on Official No on Measure M Literature
by Students United with Renters Friday Oct 26th, 2018 1:54 PM 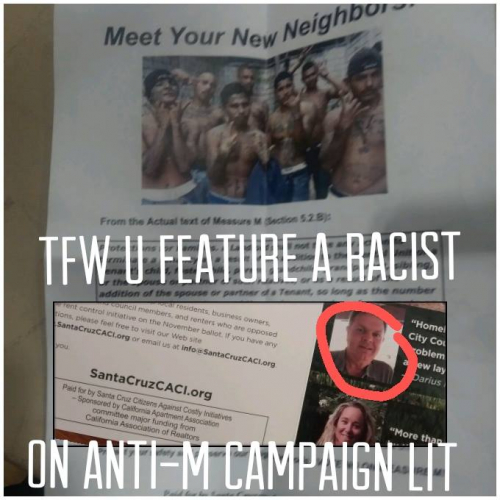 original image (680x680)
The connections between big real estate money, the campaign for rent control, and racist fearmongering against Measure M are disturbing to untangle. Darius Mohsenin, who was featured in our post last week about a xenophobic and racist flyer he distributed at No Place Like Home last week, sits here front and center on a mailer from the group "Santa Cruz Citizens Against Costly Initiatives" which has since been renamed "No on M." This group is the major vehicle for money from the California Apartment Association to oppose Measure M. The CAA gave $20,000 to No on M on 8/3/18. We also see here that the National Association of Realtors provided support for the mailer. Folks reading this should know that the California Association of Realtors and the National Association of Realtors combined have given at least $375,000 to the campaign against Measure M. Darius himself has given at least $3500 to the campaign against M.

These organizations talk about the plight of the "mom and pop" landlord but they're also happy to foreground racists like Darius that own dozens of properties across California. It's always interesting to see where the forces of wealth and white supremacy converge in the world. Are we at all surprised? 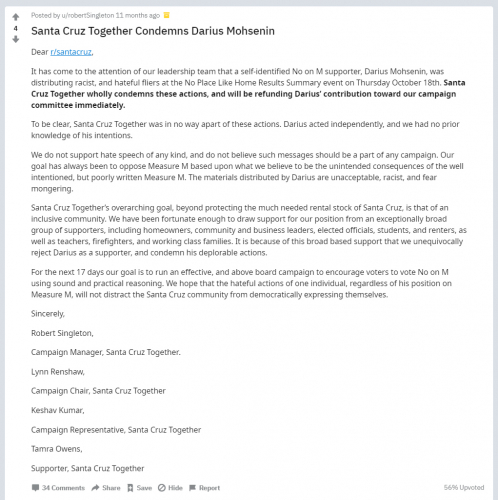 It has come to the attention of our leadership team that a self-identified No on M supporter, Darius Mohsenin, was distributing racist, and hateful fliers at the No Place Like Home Results Summary event on Thursday October 18th. Santa Cruz Together wholly condemns these actions, and will be refunding Darius’ contribution toward our campaign committee immediately.

To be clear, Santa Cruz Together was in no way apart of these actions. Darius acted independently, and we had no prior knowledge of his intentions.

We do not support hate speech of any kind, and do not believe such messages should be a part of any campaign. Our goal has always been to oppose Measure M based upon what we believe to be the unintended consequences of the well intentioned, but poorly written Measure M. The materials distributed by Darius are unacceptable, racist, and fear mongering.

Santa Cruz Together’s overarching goal, beyond protecting the much needed rental stock of Santa Cruz, is that of an inclusive community. We have been fortunate enough to draw support for our position from an exceptionally broad group of supporters, including homeowners, community and business leaders, elected officials, students, and renters, as well as teachers, firefighters, and working class families. It is because of this broad based support that we unequivocally reject Darius as a supporter, and condemn his deplorable actions.

For the next 17 days our goal is to run an effective, and above board campaign to encourage voters to vote No on M using sound and practical reasoning. We hope that the hateful actions of one individual, regardless of his position on Measure M, will not distract the Santa Cruz community from democratically expressing themselves.


Source:
https://www.reddit.com/r/santacruz/comments/9q52dk/santa_cruz_together_condemns_darius_mohsenin/
Add Your Comments
Support Independent Media
We are 100% volunteer and depend on your participation to sustain our efforts!