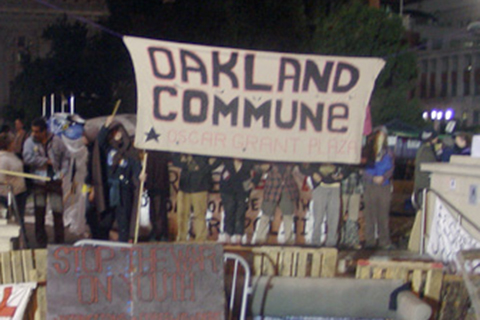 At approximately 2am on October 25th, expecting a police raid at Occupy Oakland in Oscar Grant Plaza, occupiers began to erect barricades along the perimeter and access ways to the plaza. At 4:30am, over 500 police surrounded the plaza. Oakland police were backed up by fifteen other police departments. Several occupiers linked arms at the edge of the barricades in the front of the plaza.

As police approached the barricades at the plaza entrance at 14th Street and Broadway, at least one occupier discharged two small fire extinguishers in the direction of the police line. Police responded by firing projectiles and tear gas shells and hand-lobbing at least one flash-bang grenade over the barricades. As police moved forward and began to disassemble the barricades on the Broadway and 14th Street sides of the plaza, occupiers moved deeper into the plaza, many leaving the plaza through an escape route on the opposite side of the plaza that police had left open temporarily.

Police proceeded to march through the camp tearing down tents, knocking over shelving, and pulling down almost everything that stood in the plaza. Police closed their encirclement of the plaza on all sides and announced that those who remained were under arrest. Over 70 people were arrested within the plaza during the raid, several reporting that they were shoved down to the ground and hit with batons before they were handcuffed and transported to either North County or Santa Rita jail. Within twenty minutes from the time police first fired into the camp, the occupation site was flattened, the plaza was cleared of all occupiers, and police began to disperse from the center of the plaza. Police proceeded to set up metal barricades around the plaza. Occupation Oakland at Snow Park was raided two hours later by hundreds of police. Six people were arrested. Occupiers and supporters who were not arrested protested at both Snow Park and Oscar Grant Plaza through the morning, several of whom were also arrested.

At 4pm, well over one thousand supporters gathered at the main Oakland public library to decry the police raid and to emphasize the importance of continuing with Occupy Oakland. After rallying for over an hour with multiple speakers, the large crowd marched through downtown and attempted to show support for arrestees at North County jail on 7th Street. Police blocked the marchers path and began to make arrests and use tear gas after marchers attempted to push through a police line. The march returned to 14th and Broadway where Alameda County Sheriff's deputies and other Bay Area police forces repeatedly deployed massive amounts of tear gas and fired projectiles into the crowd throughout the night. Numerous people were injured, some seriously when projectiles were fired at the heads of protesters.

On October 26th, a vigil was held for Scott Olsen, a US Marine veteran who remains in a medically-induced coma in "stable but critical condition" at Highland Hospital. Occupy Oakland announced plans to reconvene at 14th and Broadway: "We will do this everyday until we #RetakeThePlaza." At 6pm, occupiers removed fencing and again took Oscar Grant Plaza, holding their daily General Assembly. The General Assembly voted 1484 to 46 for an Oakland general strike on Wednesday, November 2nd.

Occupy Oakland Encampment Creates A Community | The Militarization of the Police | Oct. 29:

Marching through Oakland against police brutality |

March Against the Police State | Oct. 28:

Third Issue of the Occupation Times released | "Occupy, the 'Battles of Oakland', and the Face of US Police Abuse" |

Union Support for General Strike and Protests Nov. 2 | Defend Occupy Oakland With The Muscle Of Organized Labor-Statement Of ILWU Members | 1946: The Oakland General Strike [the last general strike in the U.S.] | Oct. 27:

Images of the Oakland protest |

Tear gas at 14th and Broadway |