Add an Event
Newswire
Calendar
Features
Home
Donate
From the Open-Publishing Calendar
From the Open-Publishing Newswire
Indybay Feature
Publish to Newswire
Add an Event
Related Categories: East Bay | Global Justice & Anti-Capitalism | Police State & Prisons
Battle for Occupy Oakland Begins with Police Raid, 10/25/11: photos
by Dave Id
Wednesday Oct 26th, 2011 5:24 PM
Within fifteen minutes of having rolled up on Broadway and surrounding streets in large convoys, over 500 police officers in riot gear were positioned around Oscar Grant Plaza ready to storm Occupy Oakland. Oakland police took the lead but were backed up by fifteen other police departments. Several occupiers linked arms at the edge of the barricades in the front of the plaza, where a two-week birthday celebration had been held for the occupation just twelve hours earlier. Shortly after the police line approached the front entrance to Oscar Grant Plaza, at least one occupier came up from behind the others and discharged two small fire extinguishers in the direction of the police line. Before the nitrogen cloud from the extinguishers reached police at its maximum still-thick expansion point, police responded by firing projectiles and tear gas shells and hand-lobbing at least one flash-bang grenade over the barricades. Due to the direction of the slight breeze at the time, and what appeared to be police CS shells placed into a tube to focus the direction of the gas by an occupier, the tear gas police had released wafted back toward the police line, at which point they put on gas masks under their riot helmets. As police moved forward and began to disassemble the barricades on the Broadway and 14th Street sides of the plaza, occupiers moved deeper into the plaza, many leaving the plaza through an escape route on the opposite side of the plaza that police had left open temporarily. Once the barricades were removed, police marched through the camp tearing down tents, knocking over shelving, and pulling down almost everything that stood in the plaza. Police closed their encirclement of the plaza on all sides and announced that those who remained were under arrest. Over 70 people were arrested within the plaza during the raid, several reporting that they were shoved down to the ground and hit with batons before they were handcuffed and transported to either North County or Santa Rita jail. Within twenty minutes from the time police first fired into the camp, the occupation site was flattened, the plaza was cleared of all occupiers, and police began to disperse from the center of the plaza. 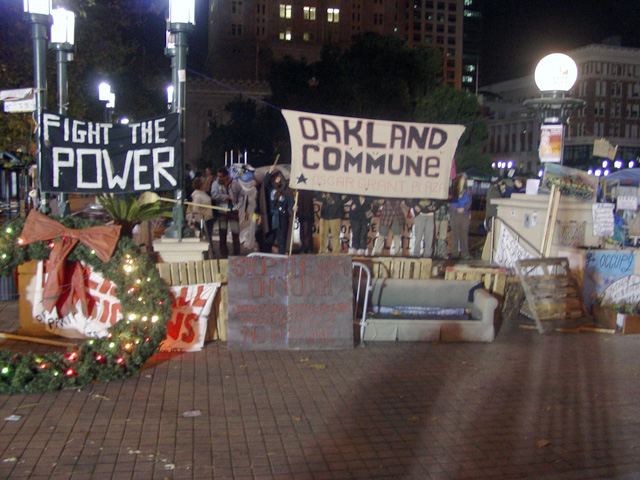 [Pictured above: occupiers stand just inside of barricades as police line moves closer; fire extinguishers discharged from behind the large square concrete base of light pole to right] 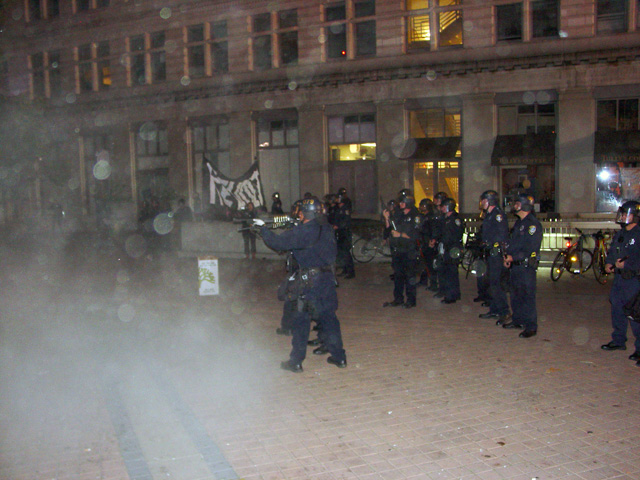 http://www.indybay.org/occupyoakland
§Police tear gas blows back at them, occupiers sit on the other side of barricades
by Dave Id Wednesday Oct 26th, 2011 5:24 PM 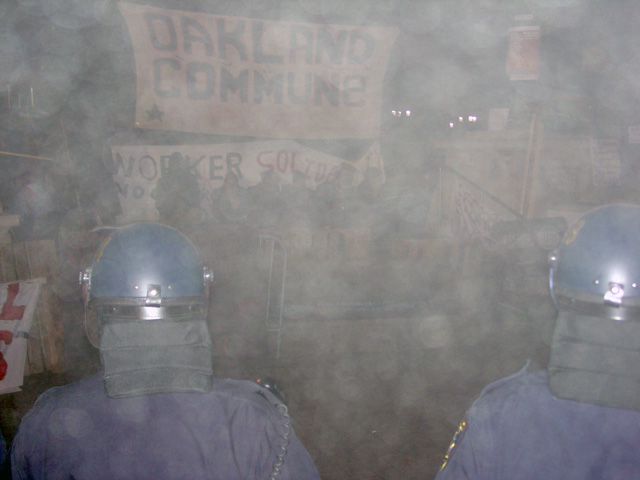 http://www.indybay.org/occupyoakland
§Every other officer takes a knee to mask up, until all are ready
by Dave Id Wednesday Oct 26th, 2011 5:24 PM 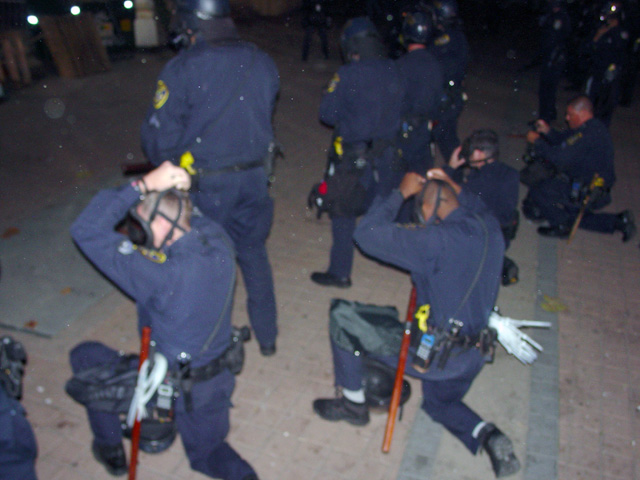 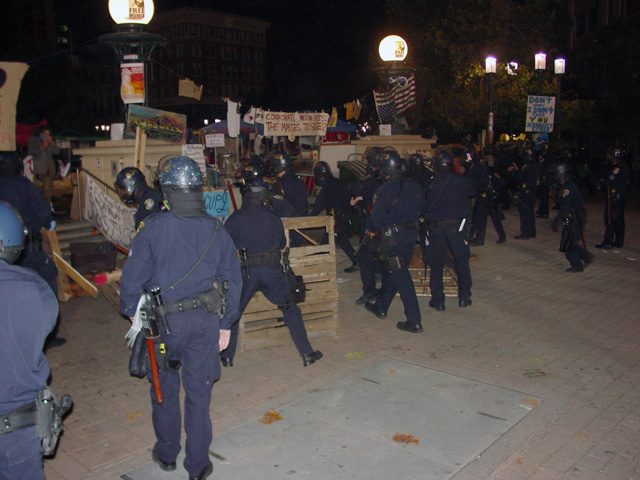 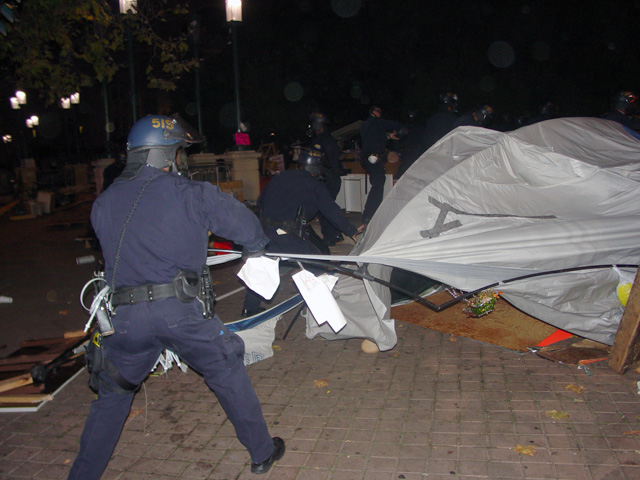 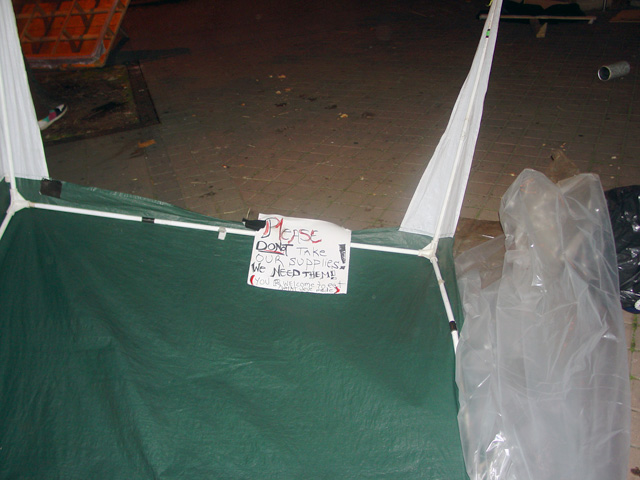 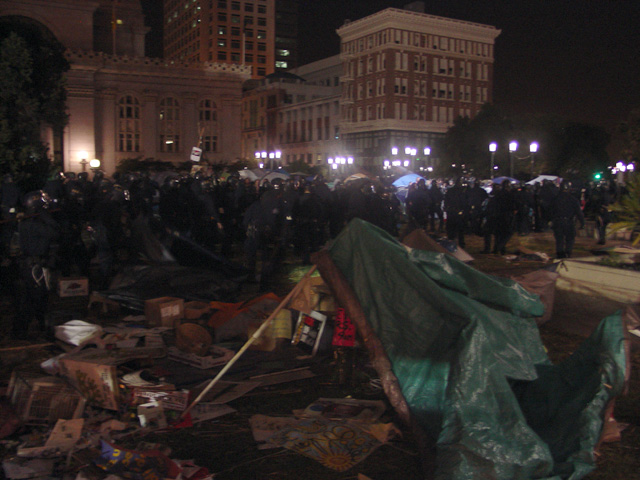 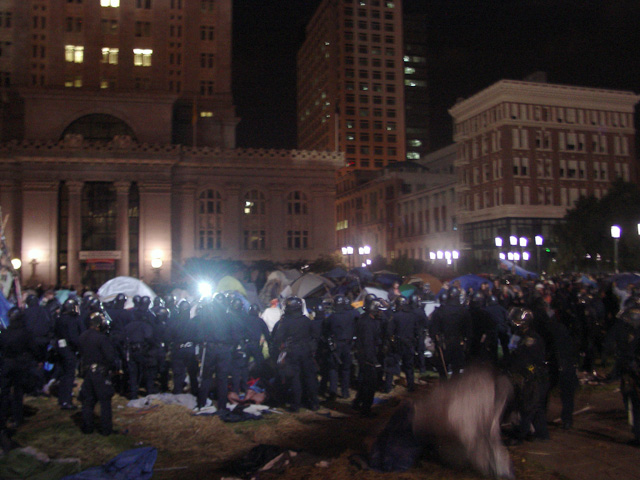 http://www.indybay.org/occupyoakland
§First arrestee removed to front of plaza, most were taken other direction to Clay Street
by Dave Id Wednesday Oct 26th, 2011 5:24 PM 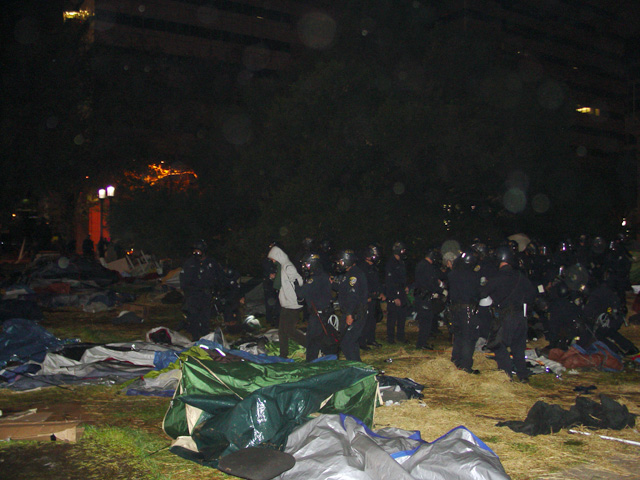 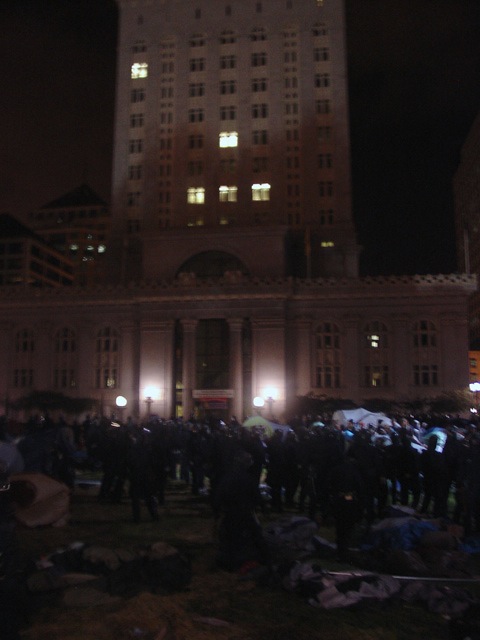 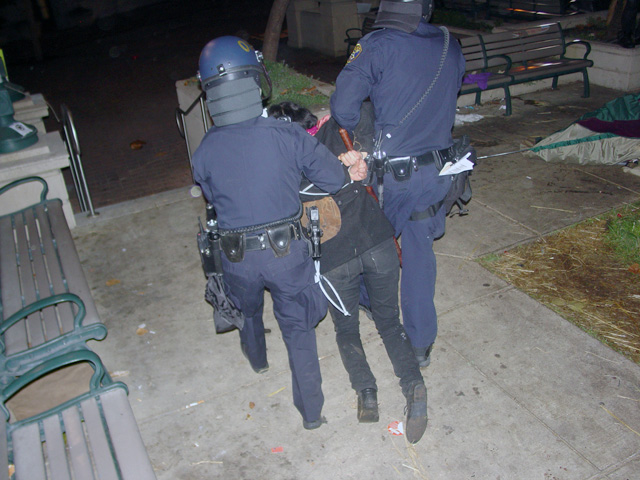 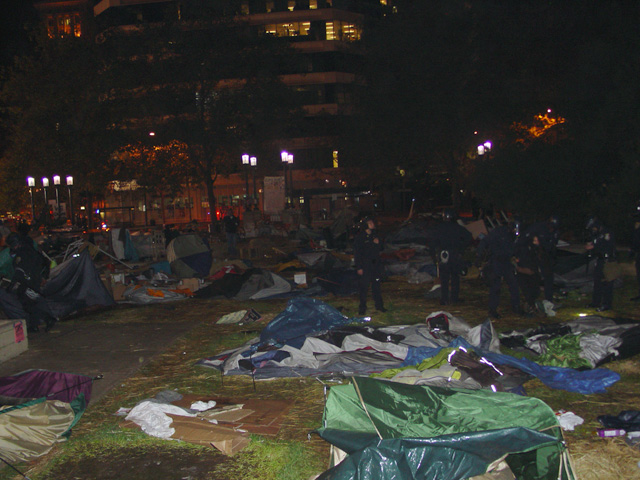 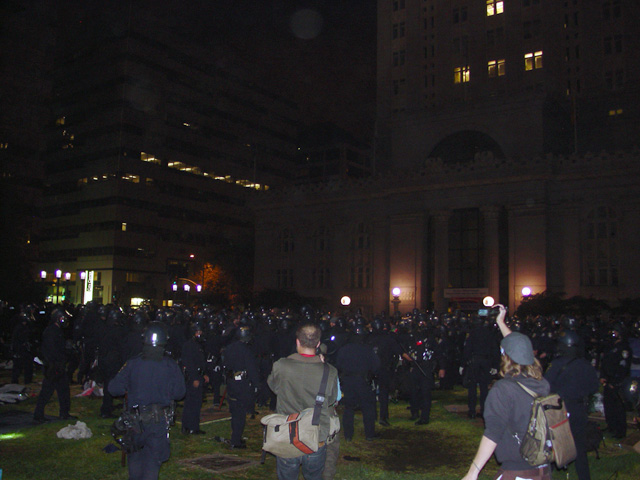 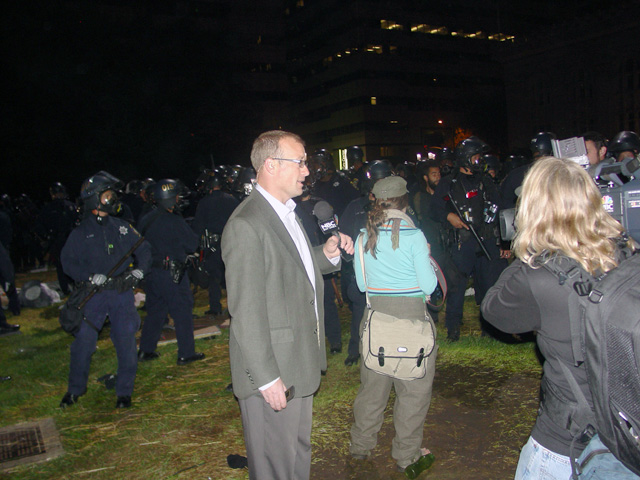 Well my name is Dick Doolittle and I'm a reporter from Grime magazine and we'd like you to comment on the tragic riots
http://www.indybay.org/newsitems/2010/07/10/18653434.php

http://www.indybay.org/occupyoakland
§Plaza cleared of occupiers, police and corporate media chum it up and share a laugh
by Dave Id Wednesday Oct 26th, 2011 5:24 PM 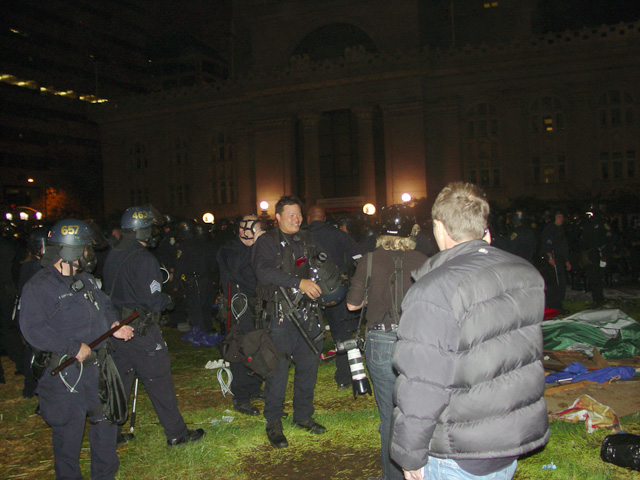 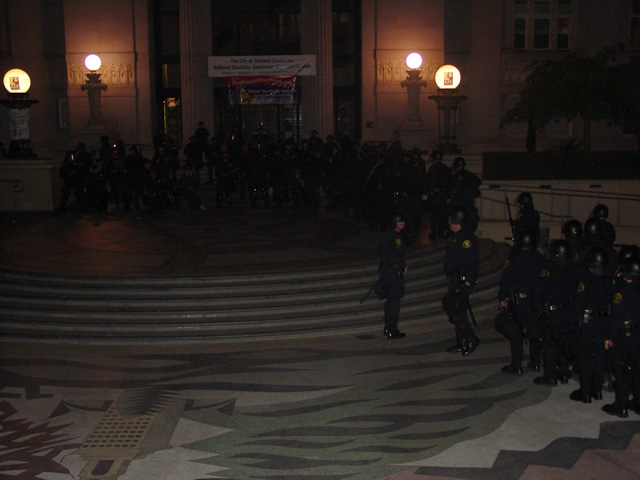 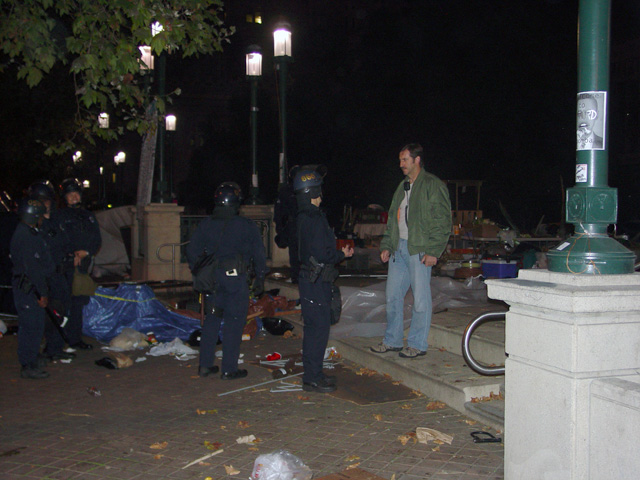 http://www.indybay.org/occupyoakland
§Wreckage where two-week birthday had been celebrated the day before
by Dave Id Wednesday Oct 26th, 2011 5:24 PM 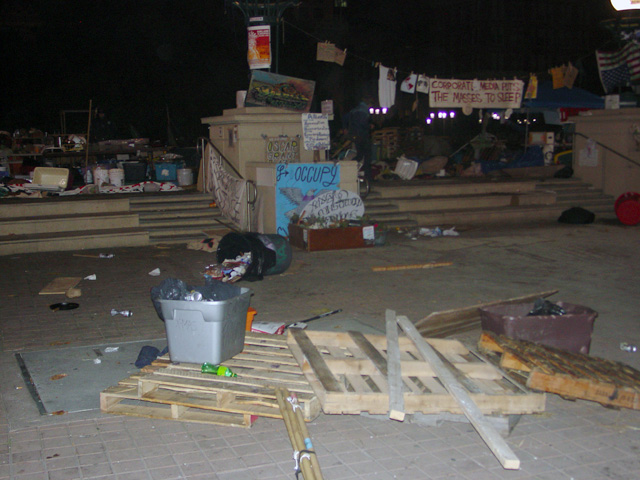 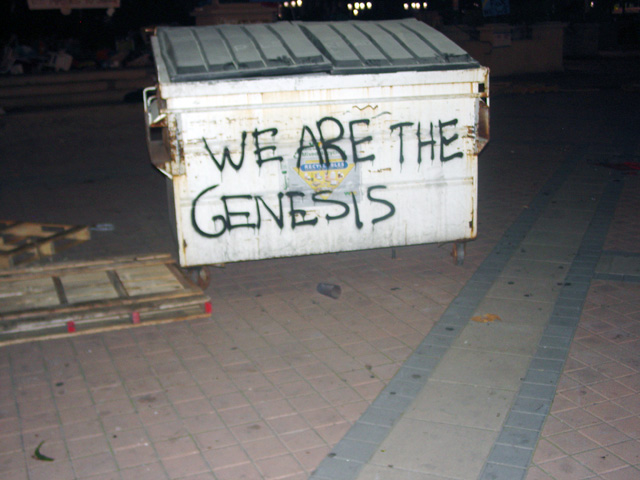 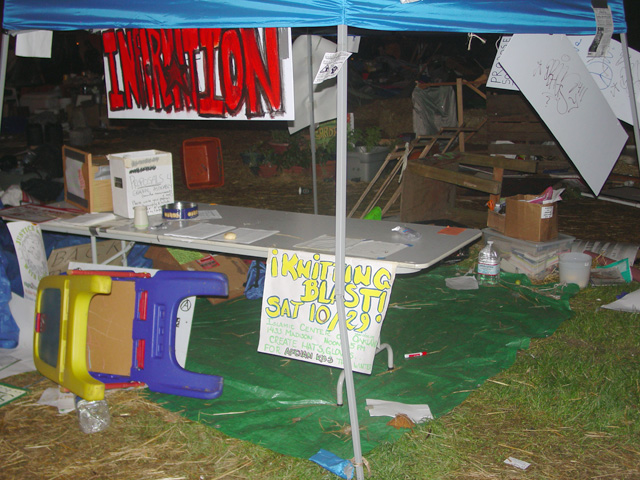 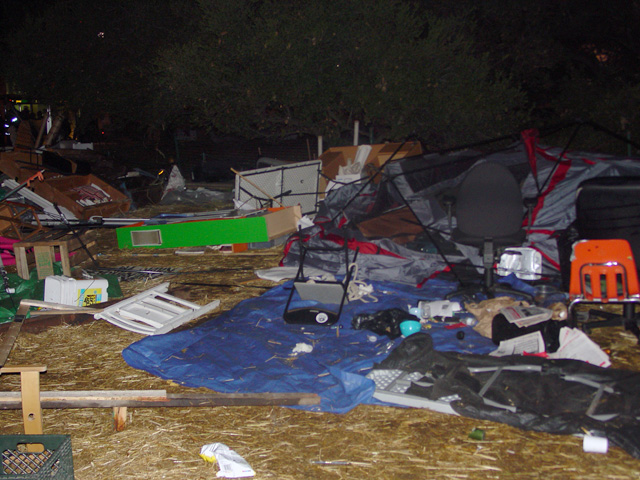 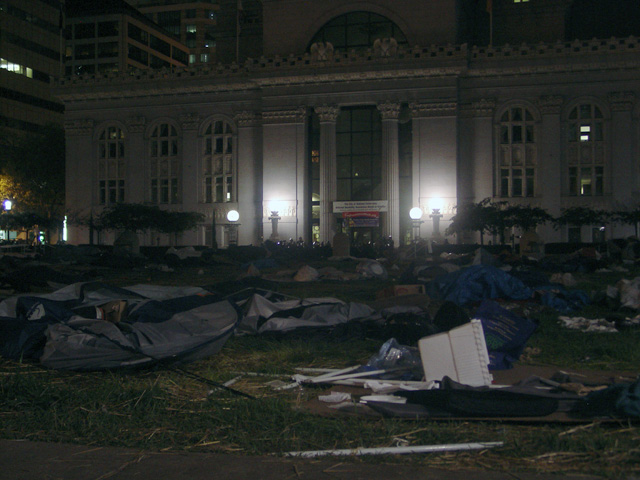 The city said occupiers could reclaim property but tent poles were snapped, many other things were broken, and everything was strewn around such that it would be impossible to match which items go with what.
http://www.indybay.org/occupyoakland
§Video of entire raid
by Dave Id Wednesday Oct 26th, 2011 8:04 PM