Add an Event
Newswire
Calendar
Features
Home
Donate
From the Open-Publishing Calendar
From the Open-Publishing Newswire
Indybay Feature
Publish to Newswire
Add an Event
Related Categories: East Bay | Global Justice & Anti-Capitalism | Police State & Prisons
Oakland Police Gleeful Over Demolition of Occupy Oakland, 10/25/11: photos
by Dave Id
Tuesday Oct 25th, 2011 11:40 AM
The Oakland police department -- along with mutual aid from numerous other Bay Area agencies including Alameda County Sheriff's Deputies, Berkeley PD, UCPD-Berkeley, Emeryville PD, Hayward PD, Pleasanton PD, Union City PD, and others -- raided Occupy Oakland before dawn this morning. It was primarily OPD that carried out the raid while the other forces provided backup and created police line perimeters in the blocks surrounding the two Occupy Oakland sites. Tear gas and projectile weapons were used on occupiers at Oscar Grant Plaza before police made their way into the camp at just after 4:45am. The camps at both Oscar Grant Plaza and Snow Park were purposefully and completely demolished. Over 70 people were arrested in the raid at the plaza and a few more at Snow Park a little over an hour later. Several others were arrested individually in the hours that followed as occupiers and supporters verbally confronted police in the surrounding areas. 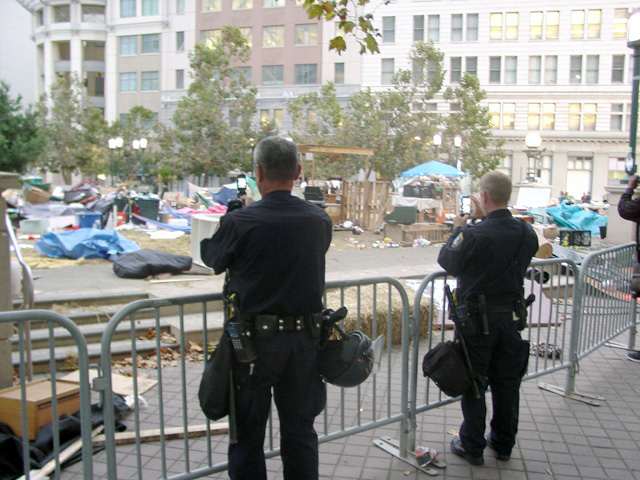 [Pictured above: these OPD officers were seen taking photographs of the wreckage on their personal mobile phones, laughing and smiling with each other as they did so]


Within minutes of the raid of Oscar Grant Plaza having been completed and the last arrestee pulled away, numerous OPD officers who remained could be seen joking and laughing with each other, apparently quite pleased with having removed a sizable number of people and having flattened the physical apparatuses of Occupy Oakland in roughly twenty minutes. There can be no doubt that Oakand police were upset that occupiers had created and successfully sustained an autonomous police-free zone for two full weeks.

Once the aftermath of the plaza raid became exposed to daylight in another couple of hours, several dozen Oakland police not on the front lines facing protesters could be seen taking souvenir or trophy photographs and video on their personal mobile phones. One officer was asked about this, and he replied that he was gathering evidence, although it was obvious that his picture taking was random and not some sort of methodical police record of the plaza.

Most of the Oakland police officers who did capture these personal momentos will be sharing them with perhaps equally gleeful family and friends outside of Oakland, because while the majority of Oakland's tax revenues go toward OPD salaries and expenses, most of these officers live in neighboring suburbs rather than within the city in which they work.


As for the use of tear gas, it was inadvertently revealed that OPD was considering gassing the occupation when a conversation was overhead between a not-too-subtle undercover officer and two other people at the Occupy Oakland General Assembly on October 20th, the evening that the city of Oakland first distributed a notice to vacate the occupation at Oscar Grant Plaza. While certainly OPD and other agencies interested in the occupation have undercover officers and/or informants that may not stand out so much, during this General Assembly it was obvious that at least a dozen undercover or plainclothes officers were present gathering information that could be used later should a raid of the camp(s) be ordered. The undercover who revealed the intention to gas the occupation first asked the two people sitting on the amphitheater level in front of him about something he had heard a speaker say from the microphone. The speaker had offered information that Maalox and similar substances can be useful to treat the burning effect of pepper spray to the eyes if such a chemical weapon should be deployed by police. The undercover asked the two people in front of him if the Maalox was something that occupiers planned to squirt into police officers' eyes. They explained that what the speaker had actually said was about a treatment for pepper spray for protesters. The undercover then went on to ask the two people if they knew anyone who had gas masks, adding that he knew someone who had some masks. It was apparent that the undercover was gauging occupier defensive capabilities. The two people said they did not, but the undercover certainly does know people with gas masks. All of the invading OPD officers donned gas masks after their first volley of the chemical weapon into the camp blew back into their faces due to the direction of the slight breeze at the time.

For more information:
http://www.indybay.org/occupyoakland
§This officer said he was collecting evidence
by Dave Id Tuesday Oct 25th, 2011 11:40 AM 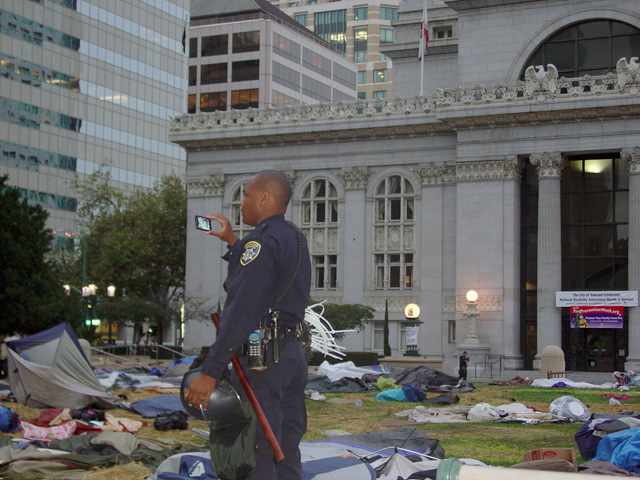 http://www.indybay.org/occupyoakland
§A poster that did not block police access to the camp needlessly and maliciously torn as police entered the plaza
by Dave Id Tuesday Oct 25th, 2011 11:40 AM 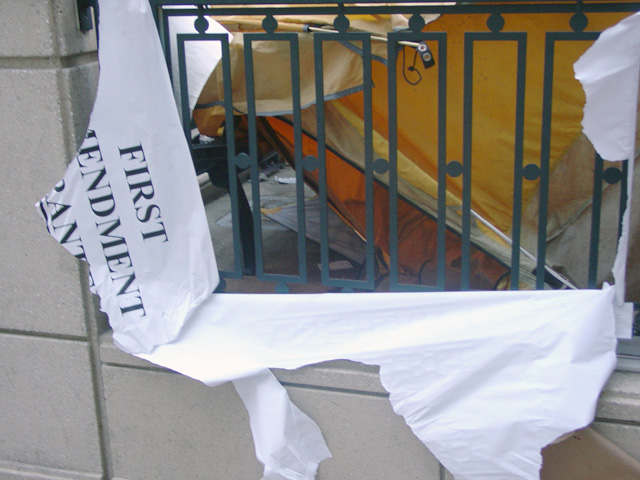