Add an Event
Newswire
Calendar
Features
Home
Donate
From the Open-Publishing Calendar
From the Open-Publishing Newswire
Indybay Feature
Publish to Newswire
Add an Event
Related Categories: East Bay | Global Justice & Anti-Capitalism | Police State & Prisons
Occupy Oakland activists call for solidarity after police violence
by Jesse S
Tuesday Oct 25th, 2011 8:00 AM
"The camp looks like a tornado went through it. Everything is destroyed, and it is currently occupied by hundreds of police."
IndyBay spoke with Tim, an organizer with Occupy Oakland, at 7:45am on Tuesday, just a few hours after numerous police agencies raided the encampment, using rubber bullets, tear gas and flash-bang grenades against activists, before arresting dozens of them.

This is what he said:

"Around 2am word spread that riot police were massing in around the area where Occupy Oakland has been for more than two weeks. Hundreds of people gathered and began to make non-violent barricades at all the entrances to the plaza.

At about 4:30am, riot police appeared on all corners of the encampment. There were roughly 500 to 700 riot police in total.

The entire plaza was completely barricaded on all sides, with palates, trash cans, chairs, a gigantic christmas wreath, police barricades from a neighboring street.

Occupiers began chanting 'go home' as they always do when police show up at Occupy Oakland, but it quickly became clear that there was an overwhelming number of police from at least four different jurisdictions.

As people continued to chant and fell back within the barricade, off of the street, the police announced that we would be arrested within the encampment. They said [they'd use force to disperse demonstrators within] five minutes, and within a minute they fired the first rounds of flash-bang grenades and rubber bullets, and then tear gas into the camp, hitting and injuring multiple people.

At this point much of the crowd began to flee through an area the police had opened up to flush the crowd out. All those who remained were arrested.

We know of roughly 70 arrests and multiple injuries, none of them extremely serious, but many for sure.

At this time people are still standing up to the police line. The camp looks like a tornado went through it. Everything is destroyed, and it is currently occupied by hundreds of police.

We're asking for public condemnations of police repression of the occupy movement in Oakland and we're also saying that people should re-converge at 14th and Madison at the public library for an emergency demonstration at 4pm today (Tuesday)."
§Photography of Police dismantling Occupy Oakland
by repost Tuesday Oct 25th, 2011 9:55 AM 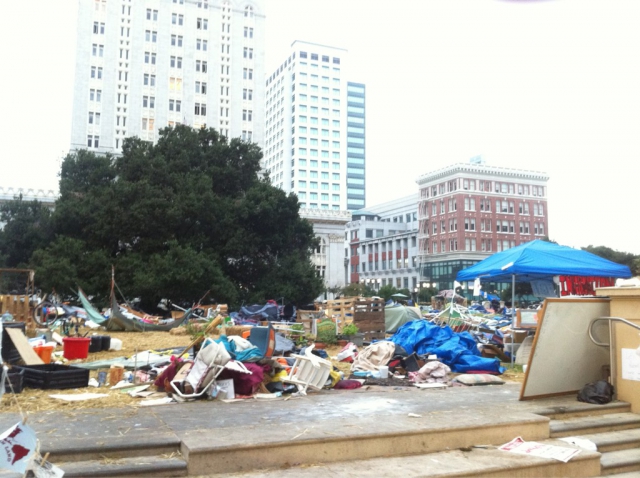 original image (1024x765)
Photography of Police dismantling Occupy Oakland
http://jpdobrin.com/blog/2011/10/photography-of-police-dismantling-occupy-oakland/
Add Your Comments
LATEST COMMENTS ABOUT THIS ARTICLE
Listed below are the latest comments about this post.
These comments are submitted anonymously by website visitors.