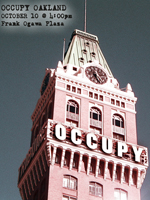 The Oakland General Assembly decided on October 4th that the people of Oakland will occupy Frank Ogawa Plaza at the corner of 14th and Broadway on Monday, October 10th starting at 4pm in solidarity with Occupy Wall Street, the many occupations underway across the country, and Indigenous Resistance Day.

Bilingual graphics have been created to pass around to help get the word out about the occupation. Organizers announced that they "expect to have workshops, food, music, childcare, a library and much more. Come ready to spend the night or just swing by to say hello. Let's do this Oakland style!"

Nearly 1000 people gathered on the first day, with around 50 tents set up overnight, including one tent occupied by Oakland city council member Desley Brooks. The plaza has been dubbed "Oscar Grant Plaza" by Occupiers.

Rally and March: All out for the very first official Occupy Oakland action!! (Oct 22nd) |

Hella Queer Oakland March To Disco Is Averted Due To Discrimination! (Oct 15th) |

Despite the rain, hella people showed up to occupy Oakland (Oct 10th) |