Add an Event
Newswire
Calendar
Features
Home
Donate
From the Open-Publishing Calendar
From the Open-Publishing Newswire
Indybay Feature
Publish to Newswire
Add an Event
Related Categories: East Bay | Global Justice & Anti-Capitalism
City of Oakland Serves Notice to Vacate on Occupy Oakland, 10/20/11
by Dave Id
Thursday Oct 20th, 2011 10:50 PM
At 8pm the city of Oakland delivered numerous copies of a letter demanding that Occupy Oakland vacate Frank Ogawa plaza after 10pm. The General Assembly discussed related issues including interactions with corporate media who have been the source of some problems. For instance, a camera person for a corporate news outlet was sticking his camera into tents without permission, was bitten by a dog, and then called police. A proposal was passed to request that corporate media check in at the Info Tent before they enter the plaza, respect people's privacy, and not record meetings or personal conversations without permission. Should the occupation be evicted tonight, contingencies include reconverging at 2pm Friday in Oscar Grant Plaza for a wedding of Ceasar Chavez's great grand-nephew, who has been supportive of the occupation. If the occupation is raided Friday night, then occupiers would reconverge Saturday, October 22nd for the Occupy Oakland mass rally and march. The last thing said at tonight's GA meeting: "We're not going anywhere!" 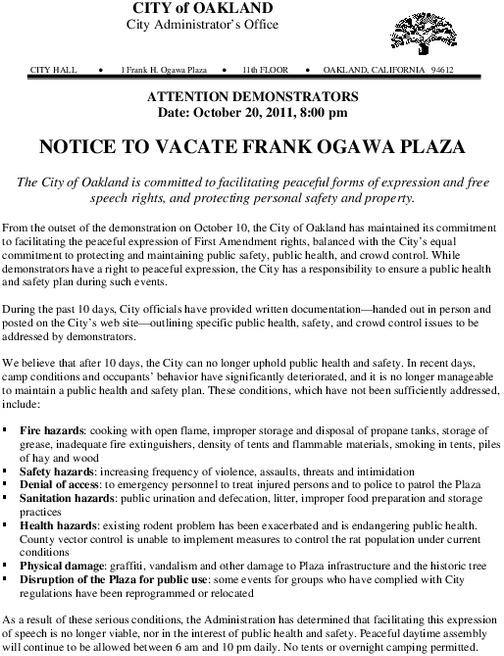 The City of Oakland is committed to facilitating peaceful forms of expression and free
speech rights, and protecting personal safety and property.

From the outset of the demonstration on October 10, the City of Oakland has maintained its commitment
to facilitating the peaceful expression of First Amendment rights, balanced with the City’s equal
commitment to protecting and maintaining public safety, public health, and crowd control. While
demonstrators have a right to peaceful expression, the City has a responsibility to ensure a public health
and safety plan during such events.

During the past 10 days, City officials have provided written documentation—handed out in person and
posted on the City’s web site—outlining specific public health, safety, and crowd control issues to be
addressed by demonstrators.

-- Fire hazards: cooking with open flame, improper storage and disposal of propane tanks, storage of
grease, inadequate fire extinguishers, density of tents and flammable materials, smoking in tents, piles
of hay and wood
-- Safety hazards: increasing frequency of violence, assaults, threats and intimidation
-- Denial of access: to emergency personnel to treat injured persons and to police to patrol the Plaza
-- Sanitation hazards: public urination and defecation, litter, improper food preparation and storage
practices
-- Health hazards: existing rodent problem has been exacerbated and is endangering public health.
County vector control is unable to implement measures to control the rat population under current
conditions
-- Physical damage: graffiti, vandalism and other damage to Plaza infrastructure and the historic tree
-- Disruption of the Plaza for public use: some events for groups who have complied with City
regulations have been reprogrammed or relocated

As a result of these serious conditions, the Administration has determined that facilitating this expression
of speech is no longer viable, nor in the interest of public health and safety. Peaceful daytime assembly
will continue to be allowed between 6 am and 10 pm daily. No tents or overnight camping permitted.

For more information:
http://www.indybay.org/occupyoakland
Add Your Comments
Support Independent Media
We are 100% volunteer and depend on your participation to sustain our efforts!