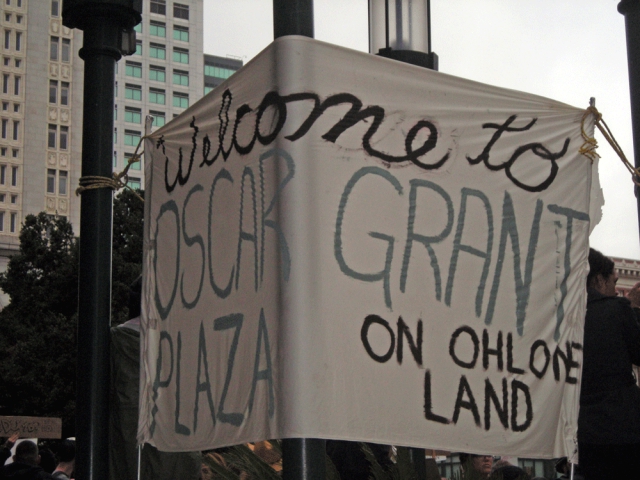 original image (1000x750)
Despite the drizzle and mist, Oakland's Frank Ogawa Plaza (re-named "Oscar Grant Plaza" for the duration, and rightfully recognized as part of the Ohlone tribal lands), had filled to near-capacity by 6pm. The occupation was timed to coincide with Indigenous People's Day. Newstrucks abounded; all the major stations, and some less major, were there. Can't wait to see the coverage. (UPDATE: Just caught KTVU-2's 10:00 News. We were the top story, and the report's pretty good ... great interviews!) All ages and just about every ethnicity were represented. This IS Oakland, wide awake. Walnut Creek gets its turn this Wednesday, 10/12/11, and next Wednesday, 10/19/11 -- corner of Mt. Diablo Boulevard & Main Street (Bank of America) -- 4:00pm.
§Upgraded Sign
by Sharon Peterson Monday Oct 10th, 2011 11:06 PM

This woman "stole" the sign from an Occupy Wall Street sign that's going around on the 'Net.

But she also did her own research, and came up with a more accurate (and more depressing) dollar figure.

The group URL is:

(Both signs are hand-painted!)