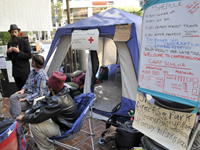 On September 17th, over one thousand demonstrators poured into New York City's financial district to confront corporate greed by establishing an ongoing presence, day and night, in lower Manhattan. The idea was to create an American Tahir Square on Wall Street. Police blocked marchers from reaching Wall Street, but hundreds persisted and set up camp in Zuccotti Park, now dubbed Liberty Plaza. Hundreds were arrested on October 1st, after marchers took the Brooklyn Bridge. The occupation continues today in New York.

In San Francisco, demonstrators likewise called for an occupation of the financial district starting on September 17th. Protesters arrived outside of 555 California Street, formerly known as the Bank of America Center, and spoke out for a new economic order in the U.S. that does not favor the wealthiest 1% at the expense of everyone else. After an hour of speeches, a large group from 555 California marched and chanted throughout downtown, with numerous passers-by cheering on the demonstration and its message of economic equality. While not as large as the East Coast action, demonstrators have maintained an ongoing presence ever since. The occupation is currently located in front of the Federal Reserve building on Market Street, and protesters marched on the afternoon of October 5th. After midnight on October 6th, SFPD and city workers raided the site and took away the kitchen, tents, and truckloads of other occupier supplies. Several were beaten by SFPD and one was arrested during the raid.

Occupations began in San Jose on Sunday, October 2nd, Santa Cruz and Sacramento on Thursday, Oct. 6th, Berkeley on Oct. 8th, and Fresno on Oct. 9th. In Sacramento, police arrested twenty occupiers and gave them stay-away orders on the first night of the occupation. Occupation began in Oakland on Monday, October 10th and another is planned for Santa Rosa beginning on Saturday, Oct. 15th.

Similar occupations have started or are being planned across the U.S. in Chicago, Boston, Los Angeles, San Diego, Eugene, Portland, Seattle, Hawaii, and dozens of other cities.

OccupySF Resists Raid by Police and City Workers After Midnight, |

OccupySF Resists Raid by Police and City Workers After Midnight, 2 of 2 (Oct 6th) |

OccupySF Resists Raid by Police and City Workers After Midnight, 1 of 2 (Oct 6th) |

Publish your own occupy reports, photos, and video to Indybay