Add an Event
Newswire
Calendar
Features
Home
Donate
From the Open-Publishing Calendar
From the Open-Publishing Newswire
Indybay Feature
Publish to Newswire
Add an Event
Related Categories: Santa Cruz Indymedia | Global Justice & Anti-Capitalism
Brief Notes from Occupy Santa Cruz General Assembly Oct. 4
by okupa
Tuesday Oct 4th, 2011 7:00 PM
There was a live stream from the Occupy Santa Cruz General Assembly meeting from about 5pm until 7:10pm. Right now people are trying to come to a decision on a place to occupy. They decided to occupy San Lorenzo Park and the Courthouse. 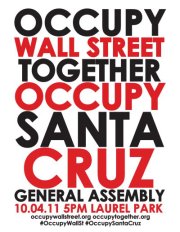 Update: 10/4 3:25 - weather looks good, stream will resume from Louden Nelson after 4PM. See you there!
§Trying to Decide on Time and Date to Start Occupation
by okupa Tuesday Oct 4th, 2011 7:09 PM
Thursday has been suggested. The stream is going offline now due to batteries..
§General Assembly at 10am
by okupa Tuesday Oct 4th, 2011 7:11 PM
Note sure where the next GA will be, but the videographer / streamer stated it would be held on Thursday at 10am.

"Santa Cruz is Occupied" -- not exactly sure what that means right now.

Stay posted. Keep posting!
§Occupation Starts on Thursday at 10am at San Lorenzo Park
by okupa Tuesday Oct 4th, 2011 8:43 PM
The decision is to occupy San Lorenzo Park starting at 10 am on Thursday, Oct. 6th.
The 6th is also being promoted by other Occupy movements, such as Portland, as a launch date.
http://www.facebook.com/OccupySantaCruz
Add Your Comments
LATEST COMMENTS ABOUT THIS ARTICLE
Listed below are the latest comments about this post.
These comments are submitted anonymously by website visitors.