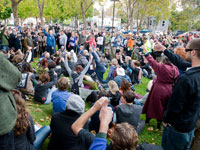 Occupy Santa Cruz, a local convergence in solidarity with Occupy Wall Street, held it's first General Assembly on October 4th at Laurel Park in Santa Cruz. Hundreds of people gathered in the park and decided by consensus to launch an occupation at San Lorenzo Park starting Thursday, October 6th at 10am. A general assembly is scheduled for 6pm, and a march is tentatively planned for 3:30pm that day as well.