Add an Event
Newswire
Calendar
Features
Home
Donate
From the Open-Publishing Calendar
From the Open-Publishing Newswire
Indybay Feature
Publish to Newswire
Add an Event
Related Categories: East Bay | Global Justice & Anti-Capitalism | Police State & Prisons
Protester injured by Police projectile at Occupy Oakland march at city hall 10.25.11
by Jay Finneburgh (jfinneburgh [at] dslextreme.com)
Tuesday Oct 25th, 2011 10:31 PM
this poor guy was right behind me when he was hit in the head with a police projectile. he went down hard and did not get up. the bright light in the second shot is from a flash-bang grenade that went off a few feet from us. he was eventually taken to highland hospital. 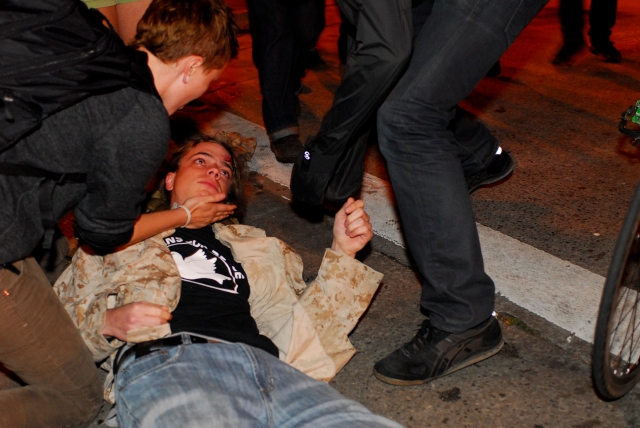 original image (1280x856)
this poor guy was right behind me when he was hit in the head with a police projectile. he went down hard and did not get up. the bright light in the second shot is from a flash-bang grenade that went off a few feet from us. he looks like he might be a veteran. he was eventually taken to highland hospital.
§
by Jay Finneburgh Tuesday Oct 25th, 2011 10:31 PM 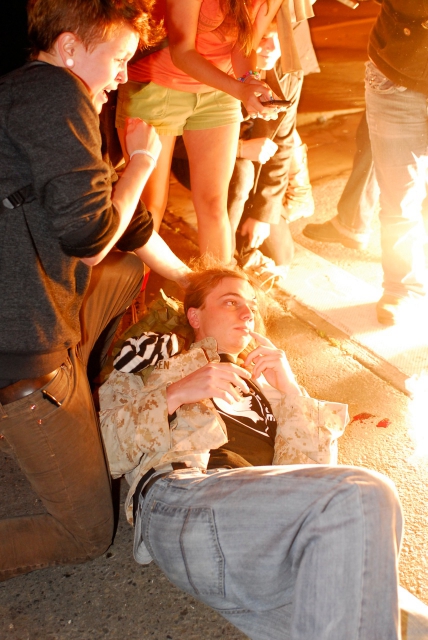 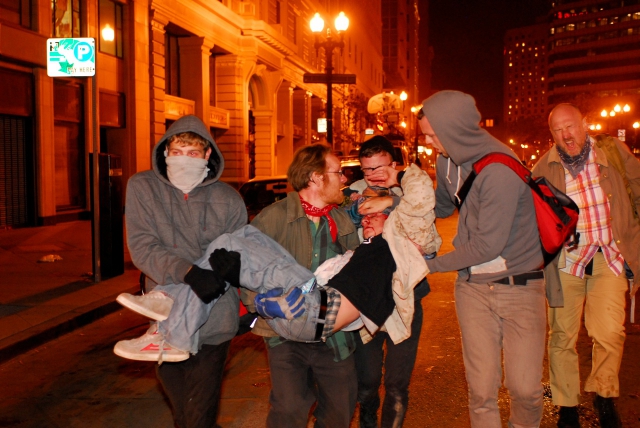 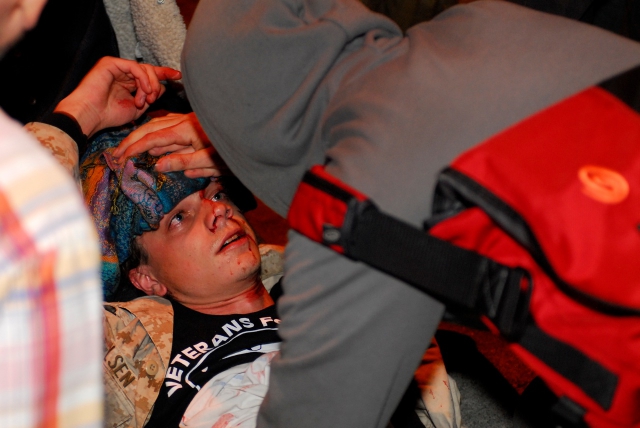 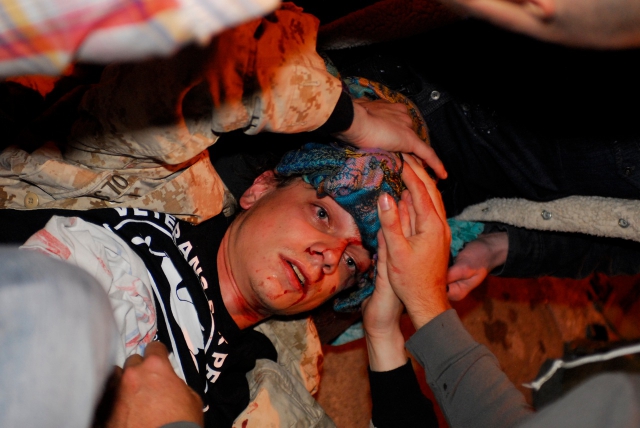 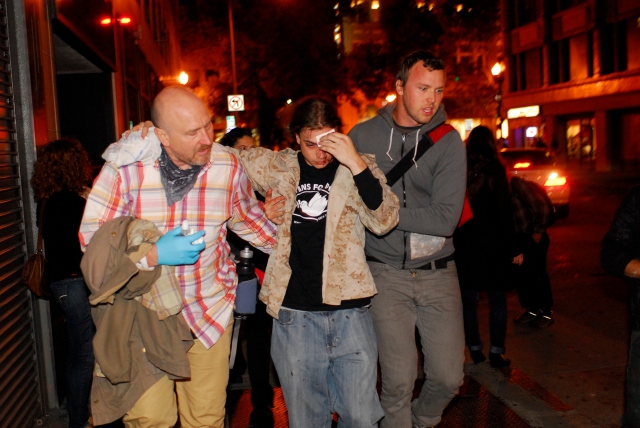 original image (1280x856)
§he is a vet and IVAW member
by aaron hinde (aaron.hinde [at] gmail.com) Wednesday Oct 26th, 2011 1:10 AM
he is a veteran and a member of iraq veterans against the war. He is in the hospital and stable but he has serious injuries, we will see how he is doing in the morning when he wakes up.
§Need info about this incident
by Adele (Yesyesready [at] gmail.com) Wednesday Oct 26th, 2011 1:11 AM
I'm at highland with Scott now. If ppl saw him get hit, know who brought him in to the hospital or know how to get in touch w his roommate or family, pls msg me.
§Update: "skull fracture and swelling of the brain"
by via Guardian Wednesday Oct 26th, 2011 11:47 AM
I've just spoken to Keith Shannon, roommate of Scott Olsen, the Iraq veteran who is in hospital after apparently having been hit in the head by a police projectile.

Shannon said doctors told him Olsen has a "skull fracture and swelling of the brain". A neurosurgeon will assess Olsen later today to determine whether he needs surgery, Shannon said.

Olsen, 24, was in 3rd Battalion, 4th Marines, before leaving the military last year. He had been opposed to the Iraq war even before his first tour to the country, Shannon said. Shannon and Olsen met in November or December 2005, and share an apartment in Daly City, south of San Francisco.

"It's really hard," Shannon said. "I really wish I had gone out with him instead of staying home last night."

Shannon, who is also 24, said he had seen the video footage showing Olsen lying on the floor as a police officer throws an explosive device near him.

"It's terrible to go over to Iraq twice and come back injured, and then get injured by the police that are supposed to be protecting us," he said.

Shannon said Olsen was hit in the head by a tear gas canister or smoke canister shot by a police officer. He said Olsen had a curved scar on his forehead consistent with a canister

Protesters who had accompanied Olsen to Highland hospital got in touch with Shannon through Facebook, after Olsen said he lived with someone called "Keith". Shannon said he was told Olsen was unable to say his surname.

Olsen's parents, who live in Wisnconsin, have been told he is in hospital and were "probably going to fly out", Shannon said.

Both Olsen and Shannon are members of Iraq Veterans Against the War and Veterans for Peace, Shannon said. He added that Olsen had been opposed to the war in Iraq before his tours of duty. Olsen served in Iraq in 2006 and 2007.
http://www.guardian.co.uk/world/blog/2011/...
Add Your Comments
LATEST COMMENTS ABOUT THIS ARTICLE
Listed below are the latest comments about this post.
These comments are submitted anonymously by website visitors.