Add an Event
Newswire
Calendar
Features
Home
Donate
From the Open-Publishing Calendar
From the Open-Publishing Newswire
Indybay Feature
Publish to Newswire
Add an Event
Related Categories: East Bay | Global Justice & Anti-Capitalism
Occupy Oakland Raid - Barricades and Police Arrival, 10/25/11: photos
by Dave Id
Tuesday Oct 25th, 2011 3:47 PM
At approximately 2am on October 25th, already expecting a possible police raid early this morning, multiple California Highway Patrol vehicles were seen moving in the proximity of Occupy Oakland in Oscar Grant Plaza and the call began to go out to campers to wake up and prepare for a possible police attack. In the next hour, more sightings of police on foot and in vehicles floated throughout the plaza and occupiers began to use materials in the camp and in the vicinity to erect makeshift barricades along the perimeter and access ways to the plaza. Almost exactly at 4:30am, a large convoy of police motorcycles, squad cars, and vans rolled up from the north on Broadway. Occupiers went into position just behind the barricades, linking arms to resist police interference with the occupation. Police already dressed in riot gear jumped out of their vehicles and began to form a long police line on Broadway. Police set up a generator-powered lights and an SUV with loudspeakers facing out of the tailgate in the intersection of 14th and Broadway. Within minutes an announcement was made that as per previous notices from the city of Oakland occupiers were to clear out of the plaza within five minutes, citing penal code violations. The police line moved forward incrementally toward the front of the occupied space until it had arrived within twenty feet of the barricades. The photographs here depict this lead-up to the final police raid of Oscar Grant Plaza. 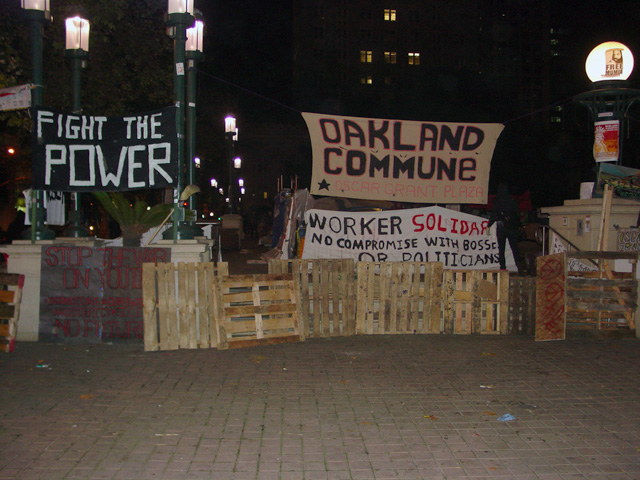 [Pictured here: not yet completed barricade at the front of the camp, where a two-week birthday celebration had been held less than twelve hours earlier] 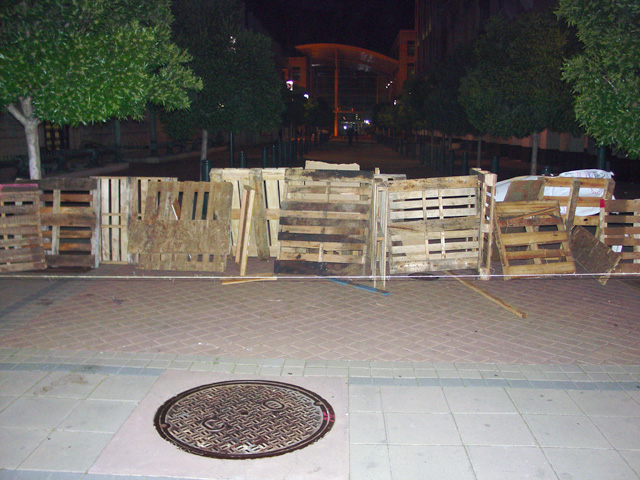 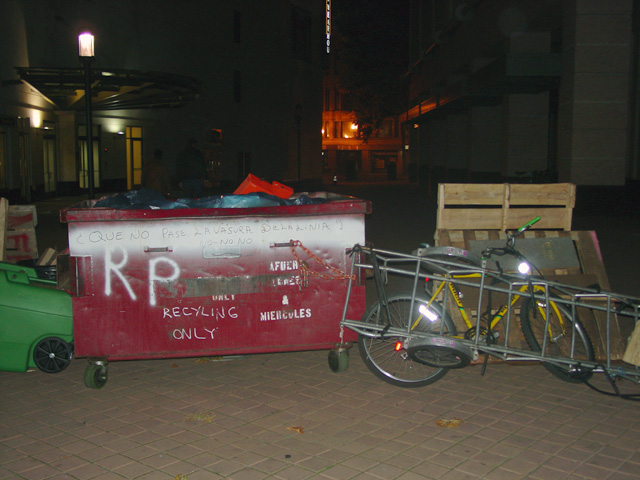 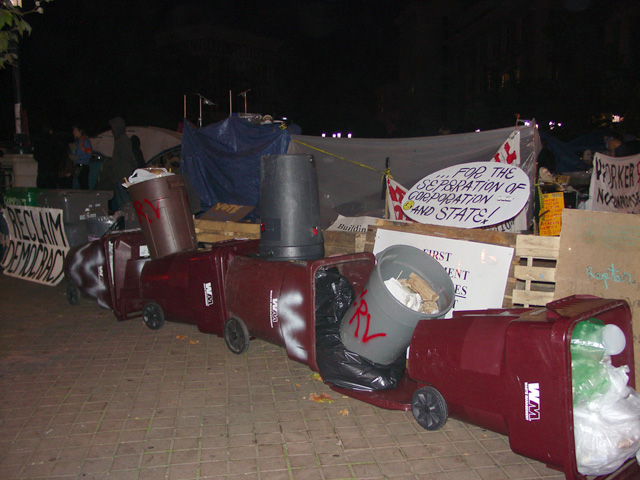 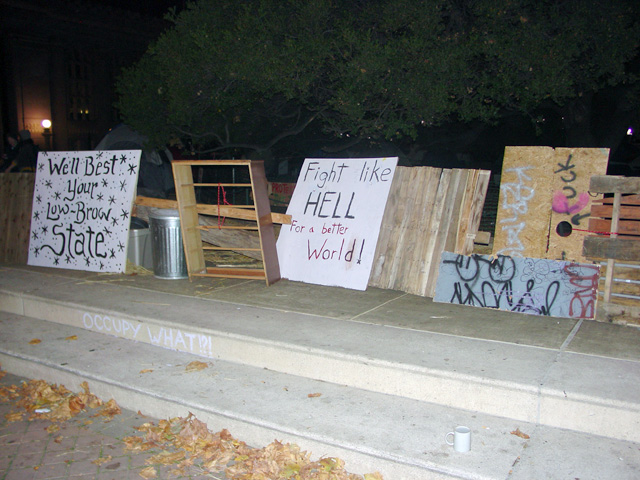 see http://www.asla.org/ppn/article.aspx?id=19088 for more on the tree 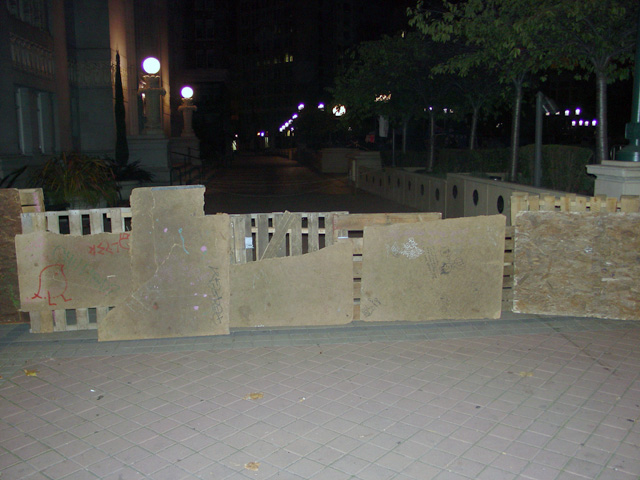 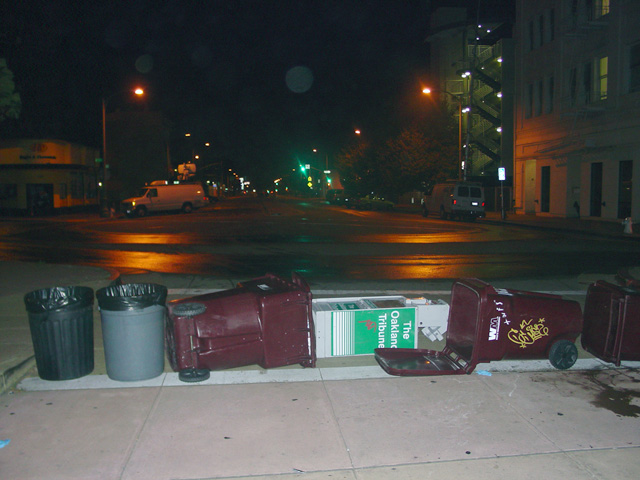 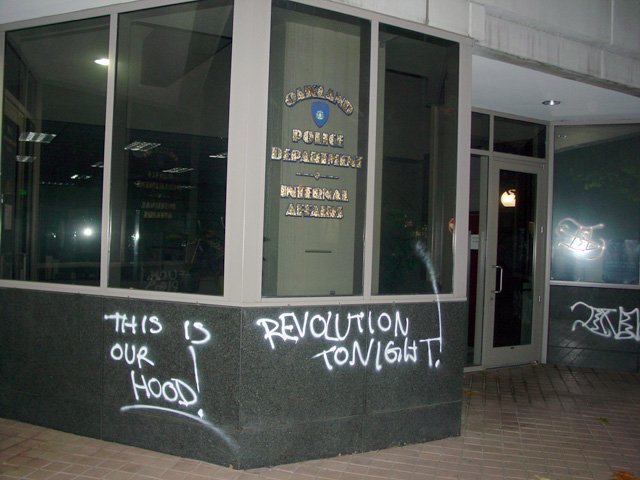 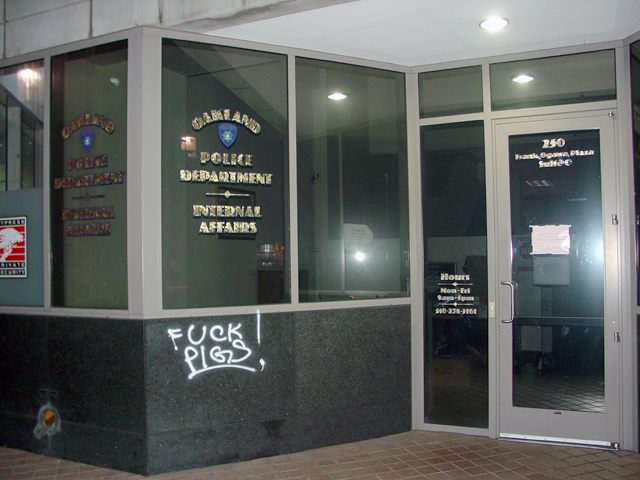 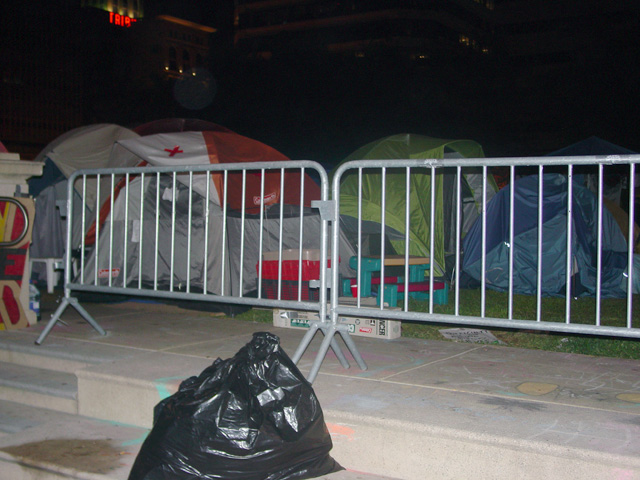 http://www.indybay.org/occupyoakland
§Revolt for a Life Worth Living and metal barricades at BART entrance
by Dave Id Tuesday Oct 25th, 2011 3:47 PM 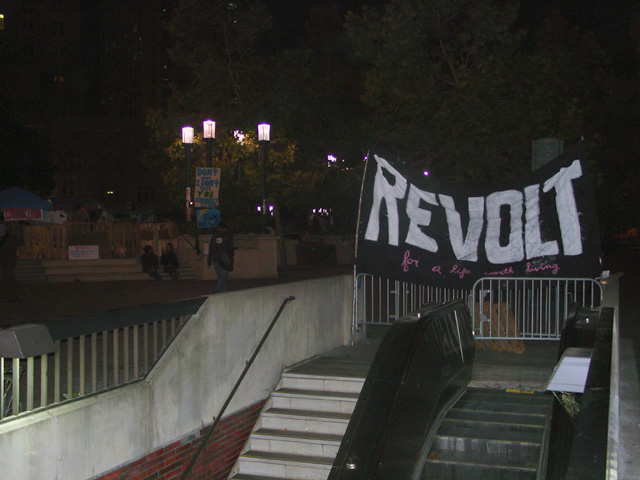 http://www.indybay.org/occupyoakland
§We Own This, with City Hall in background
by Dave Id Tuesday Oct 25th, 2011 3:47 PM 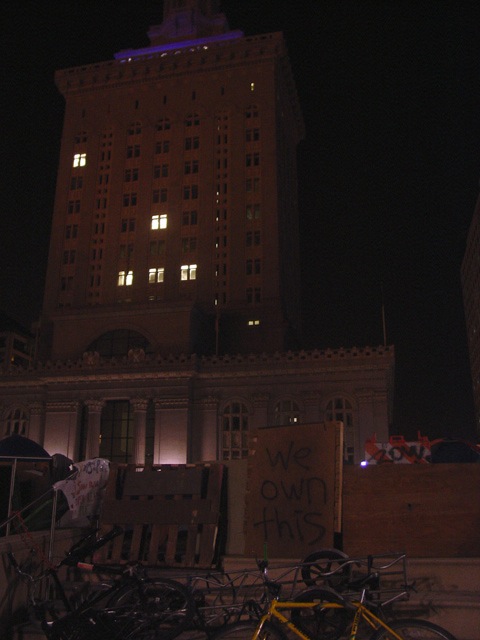 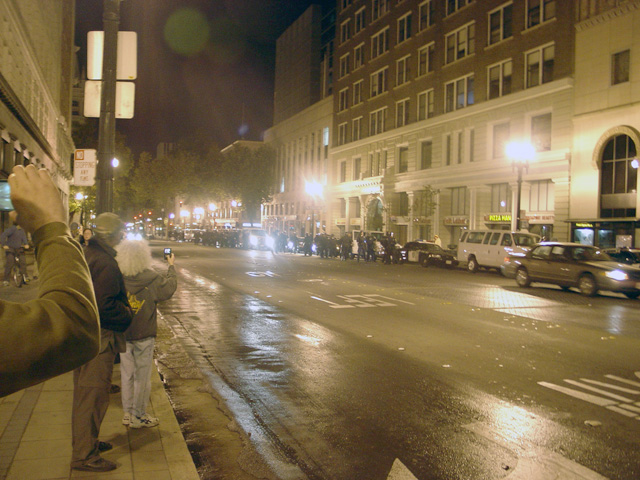 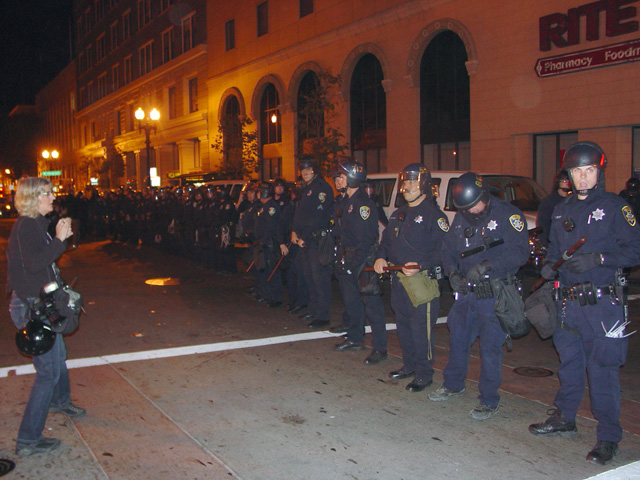 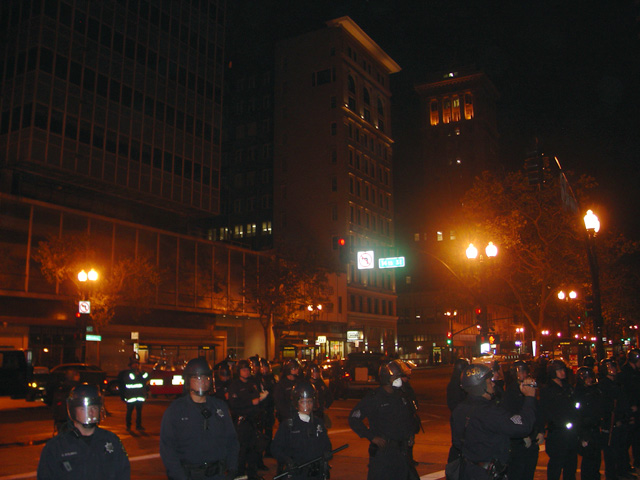 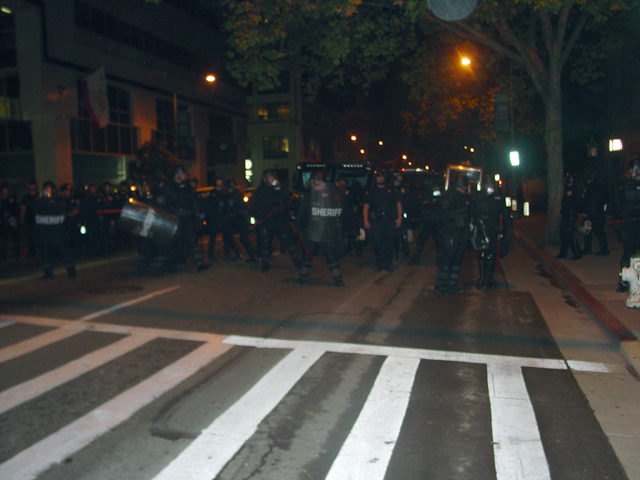 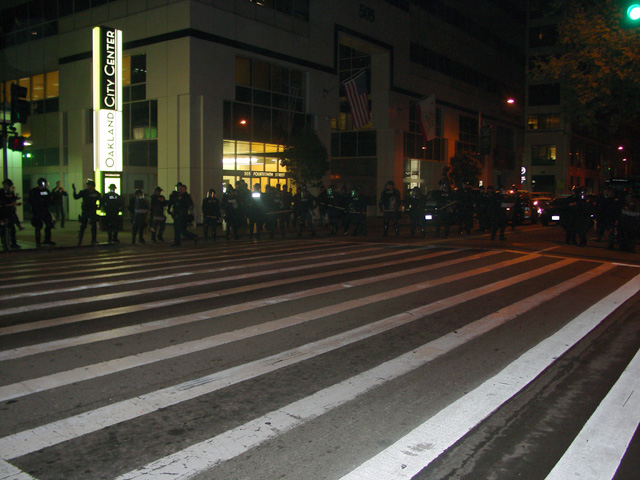 http://www.indybay.org/occupyoakland
§Videorecording occupier barricades just prior to raid that will dismantle them
by Dave Id Tuesday Oct 25th, 2011 3:47 PM 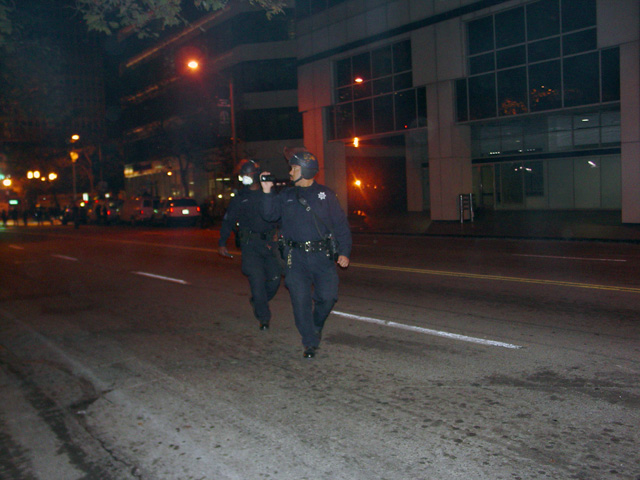 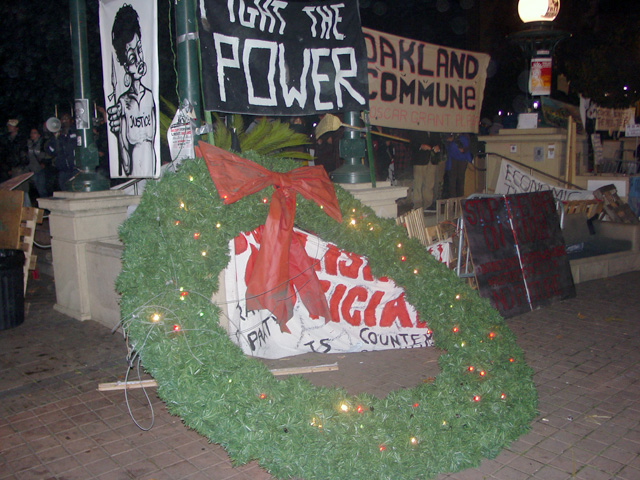 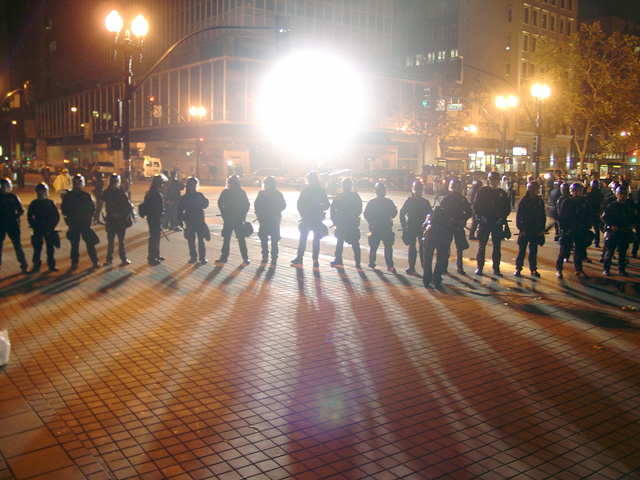