March 30, 2019: This is the first in a new series on Indybay. The goal is to amplify stories of the Palestinian people and their struggle for freedom, justice, and equality. These excerpts from the last few weeks are compiled from comprehensive coverage by the International Middle East Media Center. Please, follow and support their work. 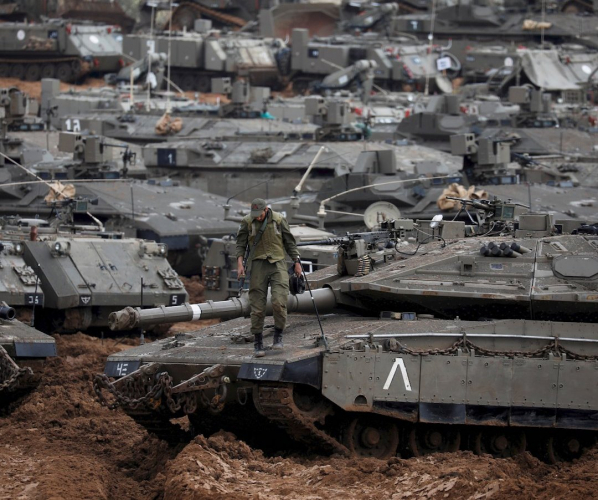 Hundreds of thousands of Palestinians gathered on lands near the Gaza perimeter fence, marking Palestinian Land Day, and the first anniversary since the beginning of the Great Return March, protesting against Israel’s brutal siege and demanding their rights. These unarmed protesters have been met with Israeli sniper fire that, so far, has killed 195 protesters, and injured 29,000 more. The UN’s Commission of Inquiry has found that Israel’s attacks on the protesters “may constitute war crimes or crimes against humanity.” Read More

Israeli soldiers killed, Saturday, four Palestinians, and injured 316 others, including 14 who suffered life-threatening wounds, during protests across the perimeter fence, in the eastern parts of the Gaza Strip. The Palestinian Health Ministry has reported that, among the wounded are 86 children and 29 women. Read More

The health condition of Palestinian detainee Ahmed Mousa, age 41, has badly worsened as a result of the open-ended hunger strike he started 28 days ago, in protest of his administrative detention with no trial or indictment. Read More

Colonization and Settlers in the Occupied Territories

In the latest escalation against the Al Aqsa Mosque in Jerusalem, the third holiest site in Islam, an Israeli court ruled on Sunday, March 17, that the Gate of Mercy (Bab al-Rahma) prayer area in the Al Aqsa Mosque compound would be closed for at least sixty days. Read More

Israeli settlers planted olive trees in pasture land belonging to Palestinians in al-Farisya village, east of Tubas, in the northern Jordan Valley, raising fear among the Palestinian residents of an impending seizure of their land for the benefit of settlers. Read More

A United Nations human rights investigator stressed that Israel is depriving millions of Palestinians of access to a regular supply of clean water while stripping their lands of minerals “in an apparent act of pillage." Read More

The US Human Right Report is intended to whitewash the Israeli occupation and excuse human rights violations against the Palestinian people, said Dr. Hanan Ashrawi, member of the Executive Committee of the Palestine Liberation Organization (PLO). “After the release of the so-called Human Rights Report, by the US State Department, it is now abundantly clear that the Trump administration is gearing all branches of the government to whitewash the Israeli occupation and its pervasive violations of human rights.” Read More

Learn about the international Boycott, Divest, and Sanctions Movement.

March 30, 2019, will mark the first anniversary of the Great March of Return in Gaza and the 43rd anniversary of Land Day in Palestine. Since March 30, 2018, more than 240 Palestinians have been killed, thousands wounded by live fire and thousands more by tear gas and other weapons. We are calling for a march and rally in solidarity with Gaza and the Palestinian struggle as a whole.

In a loud rally and march, San Franciscans demonstrated for Palestine | San Francisco Marches in Support of Palestinian Land Day |

Israeli warplanes launch dozens of airstrikes on the Gaza Strip for five hours. Two million Palestinians have become victims of collective punishment policy amid a tide of incitement at political and military echelons in Israel. Four Palestinian civilians, including 2 women and a child, were wounded, in addition to damaging a wedding hall, an office belonging to the Ministry of Detainees and Ex-Detainees Affairs. Moreover, several houses sustained material damage. Three Palestinian civilians were killed and 12 others were wounded in different incidents in the West Bank. Israeli forces continued to use excessive force against peaceful protestors in the Gaza Strip. Read More

I had the privilege of traveling to Palestine in 2010. In the course of listening to the stories of Palestinians and documenting the issues which they face in the West Bank, I met the good people of the International Middle East Media Center. I asked them what I could do to help as a reporter for the San Francisco Bay Area Independent Media Center (Indybay), and they said amplify their news reports in the States, which I've been doing ever since.

The International Middle East Media Center was developed in collaboration between Palestinian and International journalists to provide independent media coverage of Israel-Palestine. The IMEMC was founded by the Palestinian Centre for Rapprochement Between People in 2003.

Indybay's Palestine feature page includes news on solidarity actions in the US:

https://www.indybay.org/international/pale...
Add Your Comments
Support Independent Media
We are 100% volunteer and depend on your participation to sustain our efforts!