On Friday, 22 March 2019, in excessive use of forces against the peaceful protesters on the 51st Friday of the Great March of Return and Breaking Siege in the eastern Gaza Strip, Israeli forces killed 2 Palestinian civilians and wounded 181 others, including 53 Children, 5 Women, 1 Paramedic, and 3 Journalists. Three Injuries of those wounded were reported serious. 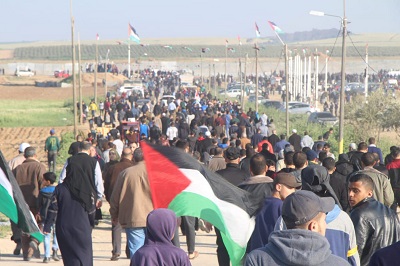 The two killed were identifed as Nedal ‘Abdel Karim Ahmed Shatat (29), from al-Mughraqa in the central Gaza Strip, and Jihad Munir Khaled Hararah (24), from al-Shija’iyah neighborhood in Gaza City. According to observations by PCHR’s fieldworkers, the Israeli forces who stationed in prone positions and in military jeeps along the fence with Israel continued to use excessive force against the protesters by opening fire and firing tear gas canisters at them. As a result, dozens of protesters were hit with bullets and teargas canisters without posing any imminent threat or danger to the life of soldiers. Moreover, PCHR’s fieldworkers said that the Israeli forces raised the sand berms on which the snipers station, particularly in eastern Khan Younis, enabling them to see clearly and completely the area where the protesters are spread and deep into the Return encampment.

These new violations come only hours after the UN Human Rights Council adopted a resolution on accountability brought by Pakistan on behalf of the Organization of the Islamic Conference (OIC). The vote had 23 states voting in favor, 8 against and with 15 abstentions, condemning Israel’s “apparent intentional use of unlawful lethal and other excessive force” against civilian protesters in Gaza. Thus, these incidents emphasize that the Israeli forces persist in its violation of the international humanitarian law and international human rights law.

The vote follows a report by the United Nations Independent Commission of Inquiry to investigate the violations committed in the oPt, on their findings and results during the period from 30 March to 31 December 2018. The Commission concluded reasonable grounds to believe that the Israeli forces committed serious violations during the Great March of Return protests that may constitute war crimes or crimes against humanity.

At approximately 15:00, thousands of civilians, including women, children and entire families, started swarming to the five encampments established by the Supreme National Authority of Great March of Return and Breaking the Siege adjacent to the border fence with Israel in eastern Gaza Strip cities. Hundreds, including children and women, approached the border fence with Israel in front of each encampment and gathered meters and tens of meters away from the main border fence, burning tires and attempting to throw stones at the Israeli forces. Although the protesters gathered in areas open to the Israeli snipers stationed on the top of the sand berms and military watchtowers and inside and behind the military jeeps, the Israeli forces fired live and rubber bullets in addition to a barrage of tear gas canisters. The Israeli shooting, which continued until at around 18:00, resulted the killing of 2 civilians:

Nedal ‘Abdel Karim Ahmed Shatat (29), from al-Mughraqa in the central Gaza Strip, was wounded at approximately 17:20 with a bullet that entered the left side of his chest and exited the right side when he was among the protesters around 50 meters away from the border fence, east of al-Bureij refugee camp. At approximately 17:40, he arrived a dead body at Shuhaa’ al-Aqsa Hospital.

Jihad Munir Khaled Hararah (24), from al-Shija’iyah neighborhood in Gaza City, was wounded in eastern Shija’iyah and arrived at 16:50 at al-Shifaa’ Hospital, where his death was declared at 17:30.

The Israeli bullets and tear gas canisters wounded 181 Palestinian civilians, including 53 Children, 5 Women, 1 Paramedic, and 3 Journalists. In addition, dozens of protesters, paramedics and journalists suffered tear gas inhalation and seizures due to tear gas canisters that were fired by the Israeli forces from the military jeeps and riffles in the eastern Gaza Strip. The Israeli forces targeted the medical field point in eastern Bureij Refugee Camp; as a result, one of the paramedics suffered tear gas inhalation. A PRCS volunteer paramedic was also hit with a tear gas canister to his hand in eastern Jabalia. This indicates the Israeli systematic policy to target the medical personnel and obstruct their humanitarian work guaranteed with protection according to international humanitarian law.

The following table shows the number of civilian casualties due to the Israeli forces’ suppression of the Great March of Return since its beginning on 30 March 2018:

PCHR emphasizes Palestinians’ right to peaceful assembly that is guaranteed by all International human rights instruments, stressing that the Israeli forces should stop using excessive force and respond to the legitimate demands of the demonstrators, particularly lifting the closure which is the real solution to end the humanitarian crisis in the Gaza Strip.

PCHR emphasizes that continuously targeting civilians, who exercise their right to peaceful assembly or while carrying out their humanitarian duty, is a serious violation of the rules of international law, international humanitarian law, the ICC Rome Statute and Fourth Geneva Convention. Thus, PCHR reiterates its call upon the ICC Prosecutor to open an official investigation in these crimes and to prosecute and hold accountable all those applying or involved in issuing orders within the Israeli Forces at the security and political echelons.

PCHR calls upon Switzerland, in its capacity as the Depository State for the Convention, to demand the High Contracting Parties to convene a meeting and ensure Israel’s respect for this Convention, noting that these grave breaches constitute war crimes under Article 147 of the same Convention and Protocol (I) Additional to the Geneva Conventions regarding the guarantee of Palestinian civilians’ right to protection in the occupied territories.

https://imemc.org/article/israeli-forces-k...
Add Your Comments
Support Independent Media
We are 100% volunteer and depend on your participation to sustain our efforts!