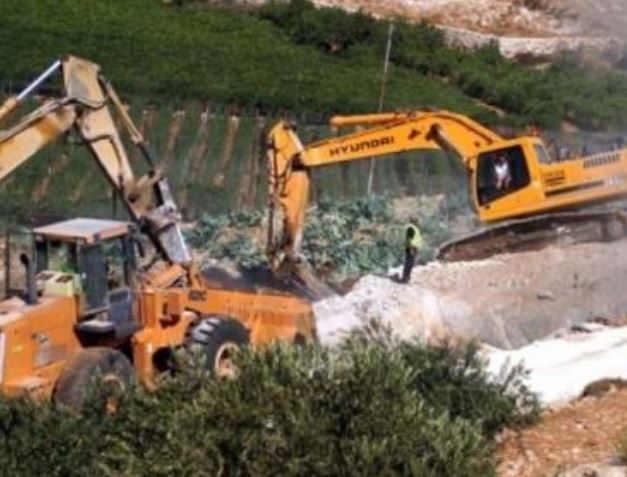 He added that the assailants came from the illegal Ahiya and Esh Kodesh colonies, which were installed on private Palestinian lands.

Daghlas also stated that the attack was carried out shortly after the soldiers prevented the Palestinians from entering their own farmlands.

While the Israeli army has been preventing the Palestinians from entering their lands, groups of illegal colonists have been constantly invading and bulldozing them.

The lands are in Basin #22, owned by the family of a late Palestinian man, identified as Ibrahim Abed al-Hajj Mohammad.

Furthermore, Daghlas stated that the soldiers have already bulldozed more than 10 Dunams of Palestinian lands, and removed large amounts of sand, before moving it to their colonialist outposts.

It is worth mentioning that, during the last two years, the soldiers have been delaying the harvest dates of 250 Dunams of Palestinian lands, planted with wheat in Jaloud ash-Sharqiya village, causing the harvest to spoil, and is currently imposing similar delays, and restrictions on the famers.

In related news, a group of colonists attacked several Palestinian shepherds, and unleashed their dogs on them and their cattle, causing injuries among the shepherds and their herds in Palestinian grazing lands near Tubas.

A similar attack took place in Ein al-Hilwa nearby area, in the Northern Plains of the West Bank.

Shepherds and farmers in that area are subject to frequent violations and assaults, and just a week ago, the colonists started marking Palestinian lands, in order to illegally fence and confiscate them.
http://imemc.org/article/illegal-colonists...
Add Your Comments
Support Independent Media
We are 100% volunteer and depend on your participation to sustain our efforts!