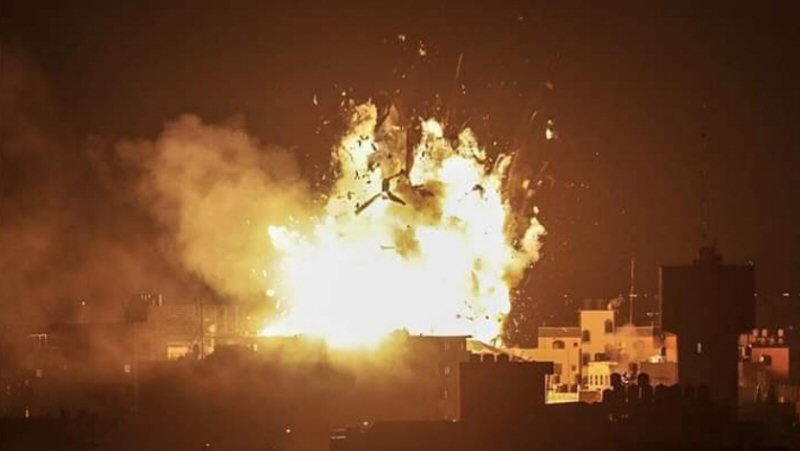 Palestinian local agencies reported that Israeli warplanes bombed 7 different locations including the Naval site in the northern Gaza Strip, the Al-Baydar Site off the Gaza shore, and the Badr site in Netzarim, all of which belong to Palestinian resistance groups.

In addition, the New Port of Khan Younis and a hall for a wedding party, along the Gaza city beach, were hit, leading to their complete destruction.

Israeli sources claimed that two Gaza rockets were fired at Tel Aviv, on Thursday night, and that the Israeli missile defense system was activated.

The sources said, according to Days of Palestine, that Israel called on Egyptian security delegation to leave Gaza. The delegation came later on Thursday evening, and Netanyahu held an emergency security consultation to monitor the magnitude of the response and its targets.

The Egyptian delegation was trying to mediate in order to achieve a more tolerable situation in Gaza. Local Palestinian agencies said that the delegation will hold several meetings with Palestinian factions to discuss ways to break the blockade, the efforts exerted to reach a long-term ceasefire agreement with Israel, the latest Israeli aggression on Al Aqsa Mosque, and the escalated attacks on Palestinian prisoners in Israeli jails.

On the other hand, Palestinians resistance categorically denied the attack and the Israeli claims that the Islamic Jihad is responsible fir the attack, local agencies reported.

Hamas and Islamic Jihad informed the Egyptian delegation that they are not responsible for firing rockets on Thursday evening.

Palestinians expect that, tonight, Gaza will be under Israeli attack.
http://imemc.org/article/israeli-warplanes...
Add Your Comments
Support Independent Media
We are 100% volunteer and depend on your participation to sustain our efforts!