Add an Event
Newswire
Calendar
Features
Home
Donate
From the Open-Publishing Calendar
From the Open-Publishing Newswire
Indybay Feature
Publish to Newswire
Add an Event
Related Categories: Palestine | International
Palestinian Allegedly Stabs, Shoots Three Israelis, Killing One Soldier
by IMEMC
Saturday Mar 23rd, 2019 11:04 PM
On the morning of Sunday, March 17, one Israeli soldier was killed and two Israelis were wounded at an entrance to Ariel, the largest Israeli settlement in the West Bank. The attack was allegedly carried out by a Palestinian who fled the scene. 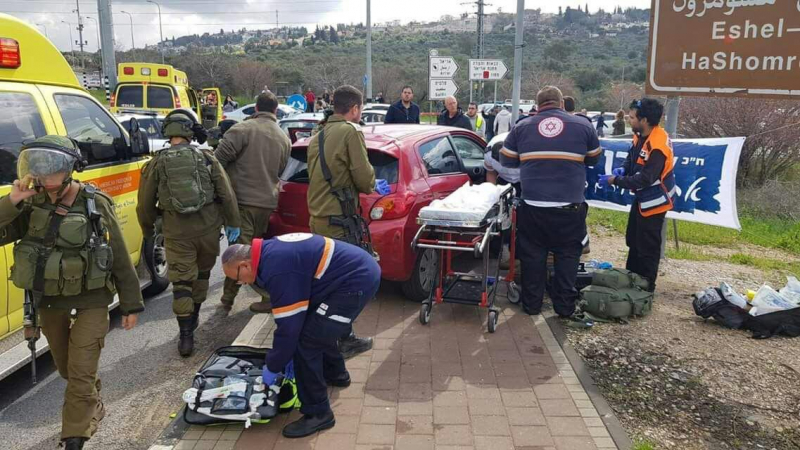 According to Israeli media sources, an unknown Palestinian allegedly arrived at the Ariel Junction checkpoint and stabbed an Israeli soldier, killing him. The assailant then allegedly picked up the soldier’s gun and shot another soldier at the checkpoint.

Israeli sources state that the Palestinian assailant then began firing at Israeli vehicles driving by on the Israeli-only road in front of the settlement.

The assailant then allegedly stole a car of an Israeli settler and drove off carrying the soldier’s gun, arriving a couple minutes later to the Gitai Junction checkpoint.

He then allegedly abandoned the car and fled on foot toward the nearby Palestinian village of Burkin.

The Israeli soldier who was killed in the attack has been identified as 19 year old Lt. Gal Keidan, from Beer Sheba in southern Israel.

The two wounded Israelis have not been identified, but Israeli medical sources have said that one is a 20-year old male, and the other is a 35-year old male.

Following the attack, Israeli forces immediately sealed the area and launched a massive invasion of Burkin, Salfit and other area villages, preventing thousands of Palestinians from leaving their homes, go to work, or conduct their daily lives as the military invasion is in progress.

According to the Yeshiva World newspaper, the Israeli military is using a protocol they call “Pressure Cooker”, which involves Israeli army “payloaders, large armored vehicles, elite forces, the Oketz K9 unit, drones, and a chopper hovering overhead”. The protocol also authorizes the demolition of a building on the assailant, if the Israeli army decides that he is inside.

The Israeli Prime Minister Binyamin Netanyahu stated that he was sure that the Israeli military would find those responsible for the attack and “bring them to justice as we have in all previous cases.”

This marks the second Israeli to be killed by a Palestinian in 2019. During that same time period, 26 Palestinians have been killed by Israeli soldiers, including 8 children.
https://imemc.org/article/palestinian-alle...
Add Your Comments
Support Independent Media
We are 100% volunteer and depend on your participation to sustain our efforts!