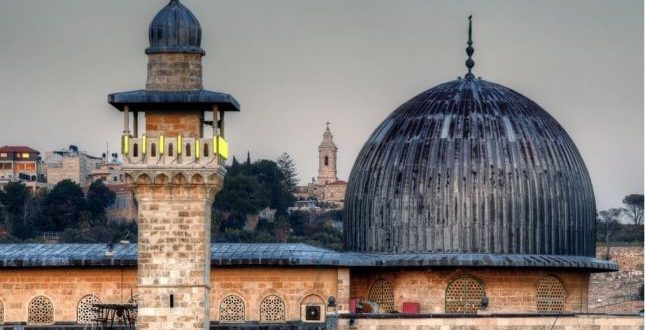 The colonists sealed the entrance to the Sheikh Makki Mosque, in the Old City of Jerusalem, according to the Maan News Agency.

The person responsible for opening and closing the mosque found out that the doors were sealed shut with an unknown adhesive material, according to local sources.

The material was removed, the doors reopened, and the matter was reported to Israeli police, who came to the scene and took photographs of the door.

Religious freedom at the Al-Aqsa Mosque compound is severely disrupted by the Israeli occupation, with almost daily incursions by illegal Israeli settlers, under the protection of Israeli police.

Israeli Authorities also decided recently to silence the call to prayer or Adhan, which is announced for each of the 5 prayer times per day, at the Ibrahimi Mosque in Hebron.

The Ibrahimi Mosque was the site of the Hebron Massacre where, in 1993, U.S. citizen and radical right-wing Zionist Baruch Goldstein shot and killed 29 people who were praying at the mosque.

After the massacre, Israeli authorities took over the mosque and split it in half, turning half of it into a synagogue.

Article 49 of the 4th Geneva Convention states that Israel is prohibited from transferring any part of its civilian population on to the land which it occupies.

But approximately 500,000 – 600,000 Israelis live in settlements across the occupied West Bank, in direct violation of the 4th Geneva Convention.
http://imemc.org/article/israeli-settlers-...
Add Your Comments
Support Independent Media
We are 100% volunteer and depend on your participation to sustain our efforts!