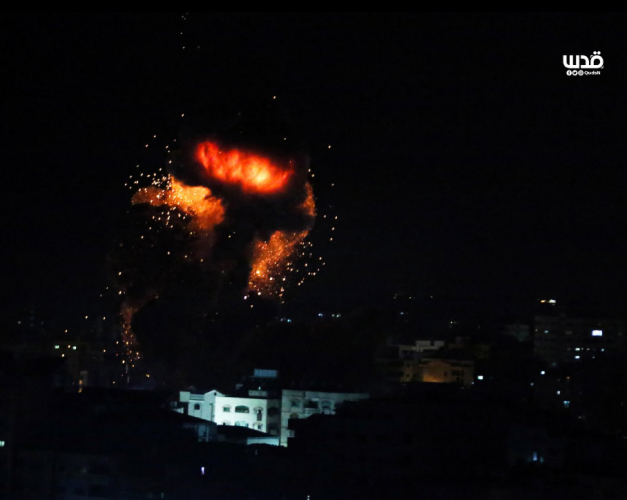 The army also fired a missile at a residential building in the Rimal neighborhood, in Gaza city, wounding two children, and causing excessive damage to the building and some surrounding homes.

At least one Palestinian was also injured when the army fired missiles into a building, east of the Sheja’eyya neighborhood, east of Gaza city.

The army also fired two missiles into two sites, west of Gaza city, and in Beit Lahia, in the northern part of the Gaza Strip, causing damage, in addition to several missiles striking Palestinian lands east of Khan Younis and Rafah, in the southern parts of the coastal region.

Medical sources said four Palestinians were injured by Israeli missiles in Beit Lahia and Jabalia, in northern Gaza, and were rushed to the Indonesian Hospital

The Maan News Agency has reported that the army fired more than 100 missiles into various areas in the Gaza Strip.

It added that all schools, universities, banks and various institutions have decided to close their doors, to avoid civilian casualties should the situation witness a further deterioration.

Among the targeted buildings are offices of Ismael Haniyya, the political leader of Hamas movement.

Israeli daily Haaretz has reported that the army launched an offensive striking what it called “Hamas targets” in the Gaza Strip after a shell was reportedly fired from Gaza.

Haaretz also quoted the army claiming that Palestinian fighters fired 30 shells from Gaza, before 10 at night, and added that the Iron Dome missile interception system managed to shoot down some of them while the rest landed in open areas.

Although armed resistance groups in Gaza have jointly announced a ceasefire under Egyptian mediation, and their willingness to stop the firing of shells if Israel stops bombing Gaza, Israeli sources have not confirmed such an agreement was officially reached.

Haaretz stated that shells were fired from Gaza into Sderot in the Negev after the reported ceasefire went into effect and added that one home was hit causing damage but no injuries.

On Sunday evening, Israeli soldiers injured two Palestinians, and caused many others to suffer the effects of teargas inhalation in the Gaza Strip.

On Sunday at dawn, the Palestinian Health Ministry in the besieged Gaza Strip has reported that a young man, identified as Habeeb al-Masri, 24, died from serious wounds he suffered, on Saturday at night, after Israeli soldiers shot him in the northern part of the coastal region.
https://imemc.org/article/israeli-airstrik...
Add Your Comments
Support Independent Media
We are 100% volunteer and depend on your participation to sustain our efforts!