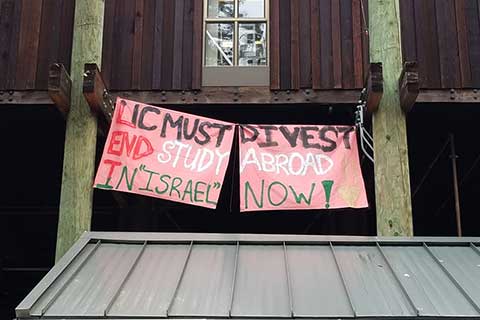 On March 7, a group of people dropped a banner in Quarry Plaza at the University of California, Santa Cruz that read "UC must divest/End Study Abroad in 'Israel' Now."

UC Santa Cruz Students for Justice in Palestine writes: We have grave concerns that the UC's study abroad programs in Israel are opposed to the values of academic freedom and are complicit in the oppression of Palestinians. Israeli study abroad programs have a demonstrated track record of being racist against non-white students. This is uncontroversial even to the UC, which, in its program guide for Israel study abroad programs, the UC itself writes, "In some cities in Israel, there has been an increase in hostility to those who appear to have African ancestry. Students who can be mistaken for African immigrants should avoid traveling alone in downtown areas."

Non-white students, and Palestinians in particular, often face discrimination by Israeli border security and are not permitted entry simply for being Palestinian. Other people racialized as non-white also face intense forms of discrimination by the Israeli state when trying to enter and in their time there. There is no question about whether or not the Israeli state is xenophobic and anti-Black. That the UC explicitly highlights the Israeli government's racism indicates to us that the UC should not continue to offer programs where members of its student body are being put at risk. Why should the UC continue to offer a program in a place that actively discriminates against Palestinians, Black people and Arab Jews?