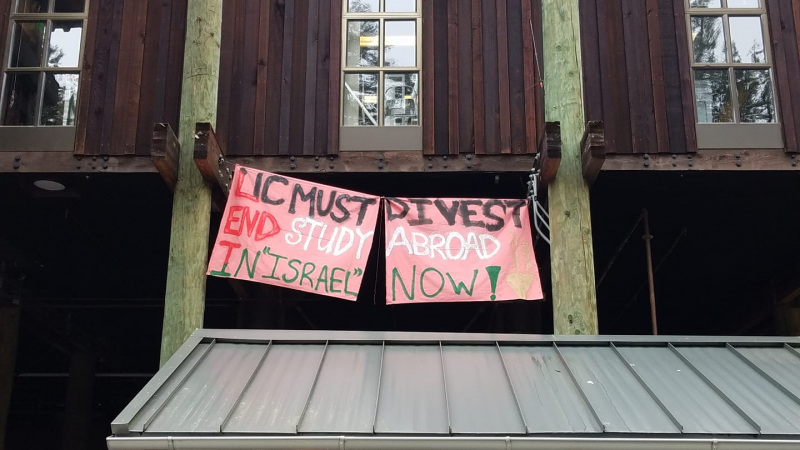 original image (1440x810)
We have grave concerns that the UC's study abroad programs in Israel are opposed to the values of academic freedom and are complicit in the oppression of Palestinians. Israeli study abroad programs have a demonstrated track record of being racist against non-white students. This is uncontroversial even to the UC, which, in its program guide for Israel study abroad programs, the UC itself writes, "In some cities in Israel, there has been an increase in hostility to those who appear to have African ancestry. Students who can be mistaken for African immigrants should avoid traveling alone in downtown areas."

Non white students, and Palestinians in particular, often face discrimination by Israeli border security and are not permitted entry simply for being Palestinian. Other people racialized as nonwhite also face intense forms of discrimination by the Israeli state when trying to enter and in their time there. There is no question about whether or not the Israeli state is xenophobic and anti-Black. That the UC explicitly highlight's the Israeli government's racism indicates to us that the UC should not continue to offer programs where members of its student body are being put at risk. Why should the UC continue to offer a program in a place that actively discriminates against Palestinians, Black people and Arab Jews?

Further, even if the UC study abroad program in Israel did not exclude nonwhite students, SJP would continue to oppose it. As SJP, we adhere to the practice of BDS - Boycott, Divestment and Sanctions - which is not a movement, but a set of tactics that activists have historically used to pressure colonial-supremacist states such as South Africa. So long as Palestinians in Israel continue to exist under an apartheid regime, so long as protesters in Gaza continue to be shot down and murdered by the Israeli military, so long as Israel continues to expand their illegal settlements across the West Bank, so long as they evict Palestinians from their homes and terrorize Palestinian political prisoners, so long as they do not allow Palestinian refugees to return to their land, we stand firmly against the UC's study abroad programs in Israel and all other forms of normalization with the Israeli state and its institutions.

Organizing for Palestinian liberation and return must also inevitably mean boycotting and challenging institutions and programs that reproduce the social ills of neocolonialism - namely, racism, xenophobia, state violence, and dispossession of national communities.

Please note that this event was not sponsored by SJP, although SJP members were free to participate in their own capacity as individuals.
https://www.facebook.com/UCSCSJP/
Add Your Comments
LATEST COMMENTS ABOUT THIS ARTICLE
Listed below are the latest comments about this post.
These comments are submitted anonymously by website visitors.