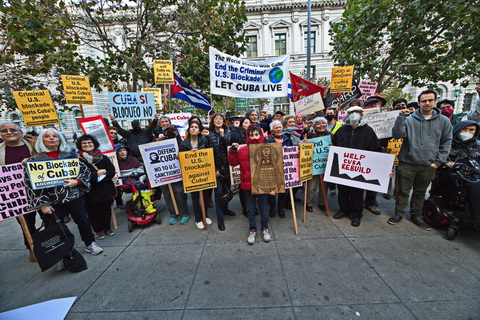 On November 3, close to a hundred demonstrators protested the US blockade of Cuba at San Francisco's Federal building. The action was timed to coordinate with the UN's 185 to 2 vote to condemn the US economic war against Cuba.

After music by the "Musicians Action Group" and speeches, the demonstrators marched to United Nations Plaza and held an additional rally in front of the statue of Simon Bolivar, a hero of South America's liberation struggles.

Prior to 1959, Cuba was ruled by US backed Fulgencio Batista who sat atop an American underworld-controlled empire of gambling, prostitution, and a tourist industry catering to the wealthy. The country also hosted corporations such as AT&T and Texaco. During the Spanish Civil War, while Hitler supplied Franco with tanks and bombers, Texaco supplied his armies with the fuel to run them.

The Cuban revolution in 1959 committed, in US eyes, the crime of expelling corporate America. Also, the establishment of a national health care system and free schooling showed Cuba as an example of a socialist alternative.

The World Stands With Cuba! We Call On Nancy Pelosi: Let Cuba Live! |

Democracy in the Americas: What can the U.S. learn about democracy from Latin America?

Daniel Ortega, good before, but not now? Really?? |