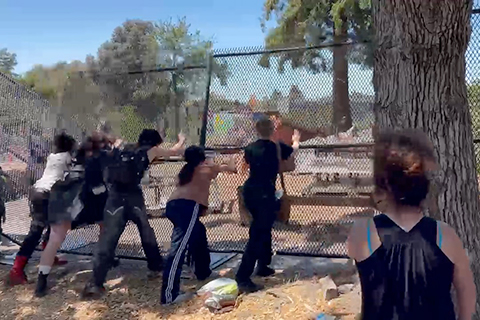 Resistance to Save People's Park Continues Despite Police Assault
After Court Ruling, Police Move in to Make Way for Construction in People's Park

On July 29, Alameda County Superior Court Judge Frank Roesch gave the thumbs-up for UC Berkeley's plans to tear down historic People's Park and construct a new $312 million building in its place, ruling that doing so would not violate the California Environmental Quality Act. After the court approved the destruction of People's Park, community activists began to fortify structures and made plans to defend the park.

Not wasting any time, UC Berkeley police, with mutual aid from CHP, CSU PD, and the Alameda County Sheriff's Office, moved in en masse to push folks out of the park just after midnight on August 3, making way for bulldozers and other equipment, and for new fencing to deny public access. Resistance came almost immediately. Park defenders committed civil disobedience to block lights and heavy equipment from being installed. Construction crews were able to cut down numerous trees in the park before dawn. Police arrested seven protesters on charges of resisting arrest, trespassing, and battery on a peace officer.

As a growing crowd of protesters continued to fight to save the park, police withdrew less than twelve hours after their initial raid and the new fencing was torn down. Following the halt on construction, protesters began to rebuild, using logs and barriers left behind as blockades to prevent construction from resuming. The city of Berkeley considered officially lifting its ban on chemical munitions so such weapons could be used to attack park defenders.

Protesters Face Off with Cops at People's Park |

Berkeley Police and demonstrators clash over development of People's Park |

People's Park — Its Place in the History of Land Art |