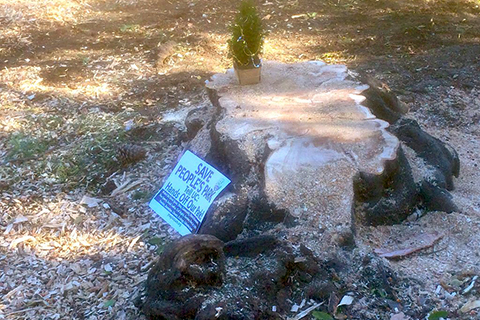 A video posted on Christmas Day shows Officer Sean Aranas of the UC Berkeley police department violently assaulting someone hanging out in People's Park. Aranas has a well-documented, lengthy history of violence and civil rights violations. Aranas gained notoriety as the cop who misused asset forfeiture to take money from a hotdog vendor near Memorial Stadium in 2017. In the recent People's Park video captured on December 21, a community member is seated in the park. The video shows the person saying "leave me alone" and "you are assaulting me." The person is not displaying any aggression towards the officer yet Aranas pulls him up off a chair then throws him to the ground.

UC Berkeley has long wanted to permanently clear and develop the park for its own purposes, denying long-fought-for public use. Over the last several years, the university has been intermittently moving into the park and whittling away at more and more foliage. Around 3am on the morning of December 28, forty-one trees were destroyed in People’s Park by UC Berkeley “deferred maintenance.” The entire east end of the forested region was decimated. The unannounced predawn timing was apparently calculated to avoid protests. A vigil was held on December 29 at 2am in response to the sneak attack.