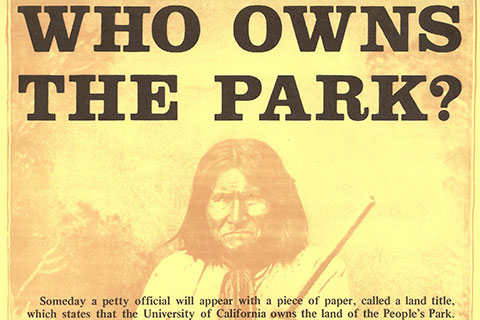 From the open-publishing newswire: Berkeley's new mayor, Jesse Arreguin, has been meeting in private with UC Berkeley's new chancellor, Carol Christ. The new mayor and the new chancellor are in agreement: People's Park must end. According to Berkeleyside, the mayor "is enthusiastic about the plans" to develop housing on People's Park. This is a crucial time to defend People's Park, through occupy tactics, and other methods of public support.

Over the past academic year, public outcry prevented the UC from cutting down more trees in People's Park. Public input succeeded in slowing down the UC's plan for development. Chancellor Nick Dirks wanted to destroy People's Park, but he was met with resolute resistance. The new Chancellor, Carol Christ, has declared that she intends to finish what Dirks started.

The development plan includes two large buildings: a unit for student housing and allegedly a unit to house the homeless. Increasing housing is a noble cause; however, the city of Berkeley has a shortage of truly public open space. Over the past few years, city government and developers have been promoting smaller private spaces such as private rooftop gardens, private beer gardens, and other similar exclusionary (customers only) and confined spaces. As the population of Berkeley increases, maintaining parks becomes ever more necessary. Larger spaces, such as People's Park, allow for diverse mingling, a concert venue, a place to share food, a place to move around in with a sense of freedom.

2019 will be the 50th anniversary of People's Park. In 2019, the public can demand that People's Park be turned into a California State Park, as to be preserved in perpetuity. People's Park could also be placed on the national historical register. Berkeley City Council and UC Berkeley are well aware that there is mass support for People's Park's preservation, but they ignore public sentiment by continuing to place People's Park under threat of development.