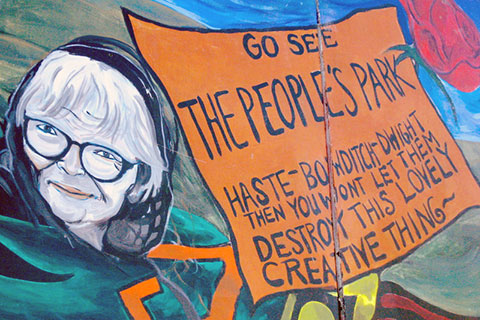 Park Advocate reports: The foliage in People's Park is thinner this year. Another tree is gone, and various bushes and shrubs have disappeared. UC Berkeley has further whittled away at the park, and a new press release from the UC states that development plans are to be revealed after this academic year ends.

The University of California is well aware that as the 49th anniversary of People's Park has passed, eligibility for historical protection is right around the corner. If People's Park can survive to its 50th year of being a public park, it would be legally challenging to do any development there.

Every time People's Park is mentioned in a press release, UC officials will claim that there have been community meetings, and that the UC is taking suggestions from the public. The truth is, there has not been a single publicly announced meeting since the UC dissolved the People's Park Community Board several years ago. There may have been private meetings with developers, city officials, and wealthy business interests, but there have not been any public forums.